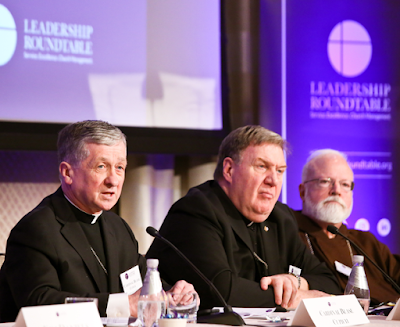 My Response: The bishops are incapable of policing themselves in responding to the sex abuse crisis. The solution is in plain site: turn it over to the police and the lay people- with accountability panels of equal numbers of women and men in their dioceses.
Bridget Mary Meehan ARCWP, https://arcwp.org

"The crisis appears to be taking a toll on how active Catholics are in their faith lives. More than a quarter of U.S. Catholics, 27 percent, say they have scaled back on how frequently they attend Mass, while 26 percent say they have reduced their financial contributions to their parishes or dioceses. The numbers are slightly lower among Catholics who normally attend Mass each week, with 15 percent of that group saying they now go less frequently and 20 percent saying they are reducing financial contributions."


Critics have argued that bishops are incapable of holding one another accountable, pointing to more than 20 state and federal law enforcement inquiries into church’s handling of abuse. Just last week, a U.S. archbishop apologized for not including a list of names of bishops who received cash gifts from a now-retired bishop who is accused of misusing diocesan funds and of making unwanted sexual advances toward adult seminarians.
Archbishop William Lori of Baltimore is managing an investigation of Bishop Michael J. Bransfield, who recently was the head of the Diocese of Wheeling-Charleston, W.Va. A report in The Washington Post found that investigators discovered Bishop Bransfield had sent checks to several U.S. bishops, including Archbishop Lori. But the report that the archbishop submitted to the Vatican did not include that list of names. Archbishop Lori apologized for his actions.
RELATED STORIES

U.S. bishops must address the crisis of pastoral courage
Sam Sawyer, S.J.
When bishops met last November, they were scheduled to vote on several provisions aimed at bishop accountability. But a last-minute intervention by the Vatican delayed the vote. Church officials in Rome said they were not given ample time to review the materials, and the Vatican wanted U.S. bishops to hold off on a vote until after a February meeting on sex abuse in Rome with prelates from around the world. Bishops are expected to debate updated proposals this week and vote on the measures Thursday.
[Explore America’s in-depth coverage of sexual abuse in the Catholic Church.]
Posted by Bridget Mary Meehan at 9:33 PM