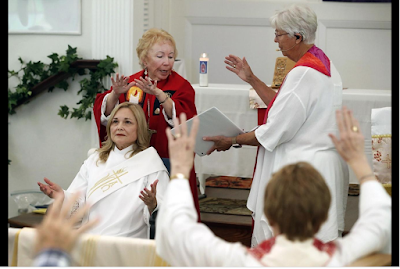 The voice began to grow louder over the past couple of years as she spent time attending the liturgies of the Heart of God Ministry of Miriam Picconi and Wanda Russell, best friends and fellow priests in the Association of Roman Catholic Women Priests.

We ordain women so that women can function as spiritual equals in the Roman Catholic Church,” Meehan said. “We’re just advancing the cause to live as Jesus taught us in the Gospels, and he treated women and men as disciples and equals.”
Jesus was about love, not a male-dominated hierarchy, Meehan said, citing the story of the Samaritan woman as proof.
In the Association of Roman Catholic Women Priests, it doesn’t matter if you’re married or divorced or unmarried or a member of the LGBTQ community.

“It’s not what your entanglements are or who your partner is, you’re just answering the call to serve God in this way,” said Gilchrist, who was previously married. “That is one of the beautiful things about an inclusive ministry.”
While more than 265 women worldwide have been ordained as Roman Catholic priests since that day in June 2002, the Catholic Church has yet to get on board.
Catholic leaders, including Pope Francis, have repeatedly denounced the idea of women becoming priests, with Francis reportedly saying “that door is closed.” Women who become ordained and those who do the ordaining are considered excommunicated by the Catholic Church.
“They claim that because we have chosen to do this we are automatically excommunicated,” Picconi said.
While excommunication bars someone from participating in the sacrament and services of the church, Picconi said it’s not likely that most clergy would be able to readily identify someone who’s been excommunicated if they attended a service.
Picconi said a small number of women priests have received excommunication letters from the Catholic Church.
“Our position is they can’t take our faith away from us,” Picconi said. “We have broken that law, but our understanding is that’s a man-made law, not God’s law.”
Due to the coronavirus pandemic, Gilchrist, like many others, won’t attempt to attend a service in person, but will celebrate Holy Week in virtual meetings.
A ‘HOLY SHAKEUP’
For Meehan, Picconi, Russell and Gilchrist, the place of women in the church is documented, something pointed out at the beginning of Gilchrist’s ordination ceremony, which was held at the First Unitarian Universalist Church of West Volusia in DeLand.
“Historical and archaeological evidence reveals that women and men served as deacons, priests and bishops during the first 1,200 years of the church’s history,” said Mary Theresa Streck, a priest and one of the founding members, along with Meehan, of the People’s Catholic Seminary.
The ceremony began with the hymn “Canticle of the Turning” and an opening prayer.
Next came witness testimony, which included a letter from Gilchrist’s son, John Potter, who was unable to attend the ordination.

Sponsored Video
Sponsored by hhs.gov
Gilchrist’s close friend, Shannon O’Neal, read from Potter’s letter.
“When I was growing up, she worked tirelessly as a public school teacher, forging a deep bond with the students who found solace and understanding in her fun and empathetic disposition. When she discussed her faithful motivation for loving others, it drew me to an inclusive spirituality that required putting beliefs into action,” Potter’s letter stated. “It’s been gratifying to see her find a community that has recognized her gifts and helped clarify her call.”
The ceremony continued with more readings, songs and prayers before approaching the Ordination Rite, which consists of the hymn “Veni Sancte Spiritus;” the examination of the candidate for priesthood; the Litany of the Saints prayer and prostration of the candidate; the laying on of hands for the priest; the Prayer of Consecration; the investiture and anointing of hands and then the presentation of the priest.
“As we ordain Shelley today, like Jesus and the Samaritan woman, we are breaking open new boundaries and claiming our spiritual authority to live our call to priestly ministry as spiritual equals in our church. This is the 21st century,” Meehan said. “We celebrate this holy shakeup for this is the day our God has made.”
Shouts of “amen” and applause followed.
The ceremony went on, and at the end, Gilchrist said she was feeling the spirit and a sense of affirmation.
Meehan said she’s hoping more women will consider becoming ordained as priests like Gilchrist.
“I think there’s an awful lot of women out there who would do this because they have loving hearts that are filled with love for Jesus and for creating community, welcoming all people to the table,” Meehan said. “We women are the church just as much as the guys.

A Blessed Holy Thursday - May you bless bread and wine at your table today in memory of Jesus who showed us how to love and serve one another. Bridget Mary
Posted by Bridget Mary Meehan at 2:28 PM