Women Take to Pulpits in German Diocese by Mada Jurado, Novena News, Time to Follow Germany's Example in the United States and Elsewhere 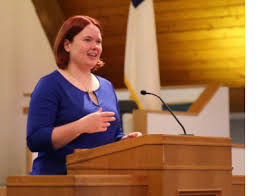 My Response: It is time for every parish to invite women to preach. Just think how refreshing this could be! At last  Catholics would hear the perspective and experiences of women as they break open the Word of  God for the world today.  It would give new life to the institutional Church and perhaps, increase the drum roll for women priests and the full equality of women!
Hey, at least, I can dream! Bridget Mary Meehan ARCWP, https://arcwp.org

By: MADA JURADO , Novena News, September 3, 2020
"Women are to take to pulpits in a German diocese, saying “it is not enough to give testimony only in the family or at work.”
Sermons are usually given by priests, but that’s about to change in the Diocese of Osnabrück, where for a week at least – from September 13 to 20 – women will proclaim and interpret the word of God IN A SERIES OF SPECIAL CHURCH SERVICES.
It all started WITH AN INVITATION from the Office for Women’s Pastoral Care of the German Bishops’ Conference for Catholic women to celebrate the INTERNATIONAL YEAR OF THE WORD OF GOD by sharing their perspectives on the Bible in their respective communities and by sending in their sermons and catecheses, a selection of which will be published in a book.
But now, the Osnabrück diocese – with the express backing of Bishop Franz-Josef Bode, who is also the vice-president of the German episcopate – is inviting women to contact their parish council or pastoral team to organise an appointment in the pulpit.
Though centred on the week from September 13-20 – to coincide with the feast of St. Hildegard of Bingen, the 12th-century German abbess, writer, composer, philosopher, mystic, polymath and Doctor of the Church – the campaign will also organise events before and after those dates.
“We believe that we now have to broaden the framework a little so that women in particular with their charisms can be seen and heard more strongly in the liturgy and preaching”, said Inga Schmitt, a consultant in the area of faith communication in the Diocese of Osnabrück, IN COMMENTS REPORTED BY GERMAN BISHOPS’ NEWS WEBSITE KATHOLISCH.DE.
Schmitt also explained that the aim of the preaching campaign is to make women – “and also… all other non-consecrated people” – more visible in Church life.
“It is not enough to give testimony in a family context or at work”, Schmitt stressed.
CANON LAW STATES that “lay persons can be permitted to preach in a church… if necessity requires it in certain circumstances or it seems advantageous in particular cases, according to the prescripts of the conference of bishops” of the different countries (can. 766).
Though the Church’s regulations also state that the homily during Mass which is part of the liturgy itself and which reflects on the day’s readings is reserved only for a priest or deacon, the German Bishops’ 1988 text “Order of the Preaching Service of the Laity” (Ordnung des Predigtesdienstes von Laien) specifically provides for lay sermons during services of the Word.
The Catholic women’s “action week” in the Osnabrück diocese will build on the success of May’s “DAY OF THE WOMEN PREACHERS” organised by the German Catholic Women’s Association (kfd) on the commemoration of the apostle Junia.
On May 17, 12 women gave sermons at 12 churches around the country to, AS ONE OF THE HOMILISTS PUT IT, “set an example of the importance of women’s and also lay preaching”.
“The Word of God is only interpreted by ordained ministers and the perspective of women is completely missing. And that cannot be, we believe. We believe that it is very important that women are also allowed to preach during the Eucharist”, the kfd explained."
This article first appeared HERE.
Posted by Bridget Mary Meehan at 5:15 PM