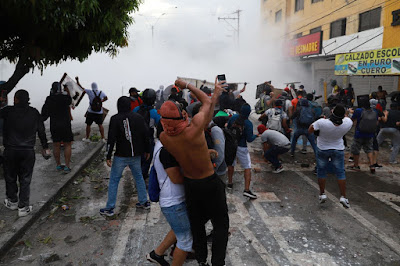 WE, THE ROMAN CATHOLIC PRIESTS-SOUTH AMERICA, JOIN THE PROPHETIC COLLECTIVE OF THE DIFFERENT SOCIAL, ETHNIC AND CULTURAL ORGANIZATIONS, ECHOING THE DENUNCIATIONS AND ANNOUNCEMENTS, IN SOLIDARITY WITH OUR COLOMBIAN PEOPLE, BEFORE THESE DAYS OF PROTEST, PAIN AND SUFFERING, INFAMOUS MURDERS AND VIOLENCE, THAT CLAMOR FOR JUSTICE AND PEACE, MARCHING WITH DIGNITY IN THE PROTESTS IN A PEACEFUL MANNER, IN THE FACE OF THE DEAFENING OF THE COLOMBIAN GOVERNMENTAL STATE, WHICH INSISTS ON OPPRESSING AND HARASSING THE PEOPLE NOT ONLY WITH PUBLIC FORCE, BUT WITH THE APPLICATION OF ITS DECREES, INCREASING IMPOVERISHMENT THROUGH IRRATIONAL TAXES, DETERIORATING HEALTH SERVICES MORE AND MORE, UNPROTECTING THE PEOPLE IN THEIR PENSION RIGHTS, LABOR RIGHTS, ABANDONMENT OF THE ELDERLY, FEMICIDES, MISTREATMENT AND SEXUAL ABUSE OF WOMEN AND CHILDREN.WE JOIN THE PROPOSAL TO REFORM THE CONGRESS AND COUNCILORS, REDUCING THEIR NUMBER, ABOLISHING THEIR PRIVILEGES THAT ALREADY BORDER ON ABUSE OF THE NATIONAL BUDGET. IT IS NOT ENOUGH JUST TO CHANGE THE CHARACTERS IN POLITICS, THE CHANGE HAS TO BE RADICAL AND TOTAL AGAINST AN INHUMAN SYSTEM, LACKING RECONCILIATION WITH NATURE AND LIFE.

"Colombia's defense minister on Monday blamed illegal armed groups for looting and vandalism during five days of street protests but would not confirm how many demonstrators had died.

The protests, which began last week, demanded the withdrawal of a tax reform proposed by the government of President Ivan Duque, who said on Sunday the legislation would be retracted. read more

Demonstrations resumed on Monday in the capital, Bogota, and other cities including Medellin and Cali despite the announcement, with highways also blocked in some areas of the country."