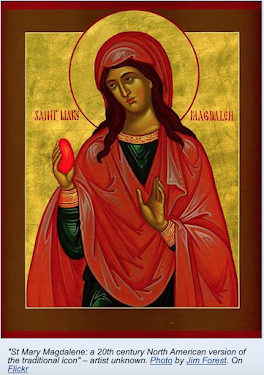 Sister Joan Chittister calls Mary Magdalene “an important icon for the 21st Century” who urges women to listen to the call of Christ over the call of the church; and who calls “women to courage and men to humility;” and a Christianity that “rises above sexism.”

When I preached my first sermon as an Episcopal priest, a woman came up afterwards and said, “I’m Roman Catholic and I disagreed with your decision.  But I’ve read you books and felt I should come to hear you speak.  During the mass I was hit right here”—she pointed to her heart—”first by a woman celebrating mass and second by your talk.  Now I get it.  You have to speak—you have so much we have to hear and your church won’t let you speak.”

Many Catholics have told me over the years how meaningful it is to see women priests celebrating Mass such as the woman celebrant at Grace Cathedral that day.

The arguments offered against ordaining women by Popes John Paul II, Benedict XVI and now repeated by Pope Francis are simply without basis.  They tell us that Jesus did not ordain women and so we must not do so.  They are correct that Jesus did not ordain women—but neither did he ordain men!  The priesthood is a second century response to the Jesus event–so the argument simply does not hold water.  It is spurious.  By the second century men had taken over the running of things and women were put in their place.

“Equality Under God: Women Priests.” A small group of women are defying the Catholic Church’s prohibition of women’s ordination and becoming priests anyway. Video by CBC News: The National

Jesus broke with traditional patriarchal control compulsions and Mary Magdalene, who actually lived in Jesus’ day and was close to him, represents women leadership because she announced the good news of the resurrection and she developed a ministry of healing and exorcisms.

New Testament scholar Bruce Chilton has written a substantive book on Mary Magdalene: A Biography in which he tells us that she offers “insight into the ultimate significance of who her rabbi was and what his life and death truly mean.”  He calls Mary “one of the prime catalysts and shaping forces of Christianity—the role for her that Mark’s text intimates.”

A lot of the strange stories foisted onto her “are unmistakably male fantasies” such as Martin Scorsese’s picture in The Last Temptation of Christ, of her operating a “one-woman Galilean brothel” such as never could have had happened in a small Jewish enclave.  Or that she bore Jesus’s child (Dan Brown).

[Mary Magdalene offered] signature sacraments of exorcism, anointing, and vision….Her three gifts of Spirit include dissolving what is impure or evil, offering ointment for sickness and sin, and permitting her followers to perceive the spiritual truth of Resurrection.  These sacraments follow the centuries-old practice of women in Galilean Judaism… and did not require hierarchy or dogma.

Her life “is a sacramental biography” marked by how she “unleashed” ritual power during Jesus’ life and at his death.*

There is much here for women, men and their institutions to meditate on in 2021.

Adapted from Matthew Fox, Confessions: The Making of a Post-denominational Priest, pp. 277f.

What does Mary Magdalene mean to you?  How do you see her rediscovery speaking to culture and religion and spirituality today?

Posted by Bridget Mary Meehan at 7:55 AM