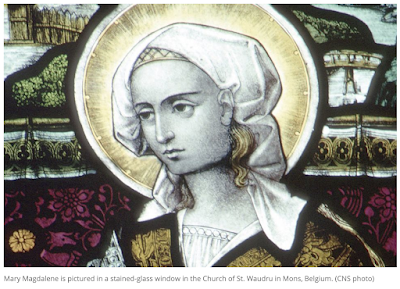 https://www.ncronline.org/news/opinion/simply-spirit/women-believers-changed-roman-empire-now-we-must-change-roman-church
On the feast day of the "apostle to the apostles," St. Mary of Magdala, I want to reflect on something I suspect this first witness to the Resurrection and foremost leader in the early Jesus movement might find puzzling. Namely, what is the big deal about recognizing women's leadership in today's Catholic faith communities?
We live in a very different cultural context than did Mary of Magdala and other early Christian women, but our own times are no less in need of Christ's healing energy than the ones in which they lived.

The Jesus movement spread rapidly throughout the Roman Empire because of the initiative of female prophets, evangelists, missionaries, heads of house churches and widows, and financial support from Christian businesswomen such as Mary of Magdala and Joanna (Luke 8:1-3) as well as Lydia (Acts 16:11-40), Phoebe (Romans 16:1-2), Olympias, a fourth-century deacon (whose feast day is July 25) and others.

Pope Benedict XVI himself acknowledged as much on Feb. 14, 2007, when he said the "the history of Christianity would have turned out very differently without the contribution of women" and noted the "female presence that was anything but secondary."

Church historians tell us that the domestic networking and evangelizing efforts of women led to the remarkable expansion of early Christianity. Early house churches were led by women of status such as Grapte, a second-century leader of communities of widows and orphans in Rome. Through the house church, early Christians gained access to social networks that brought them into contact with people from diverse social classes.

When a female head of household, perhaps a wealthy widow or freed woman, converted to Christianity, Christian evangelists such as Prisca (Romans 16:3-5) or Paul gained access not only to her domestic household but also to her patronage network. This meant that her slaves, freed persons, children, relatives and patronal clients would convert as well. Thus, when Paul converted Lydia, he automatically gained entry to a broad swath of social relationships and a potentially wide audience.

While most Christian women were probably freeborn or freed persons, they were able to acquire wealth (and therefore status), through small business enterprises such as processing wool, trading in purple dye (Lydia), leather work and tentmaking (Prisca), and the like.

In their exhaustively researched book A Woman's Place, Carolyn Osiek and Margaret Y. MacDonald demonstrated that within their Christian social networks, these lower-class Christian women had money, high status and freedom of movement, especially throughout the extended household of antiquity.

This is affirmed by a notorious critic of the early church, Celsus, who took a dim view of women's evangelizing activities.

Celsus believed "the Christian family is at the very heart of the growth of a troublesome new movement." He said Christians encouraged insubordination, and convinced the "foolish, dishonorable and stupid and slaves, women and little children," not "to pay any attention to their father and school teachers" and "leave father and their school masters, and go along with the women and little children who are play fellows to the women's apartments, the wooldresser's shop, or the cobbler's or the washer woman's shop" [Origen, Against Celsus].

Celsus' critique coincides with evidence from early Christian texts that the Jesus movement expanded through house churches and small business networks such as those of Lydia, Prisca, Grapte and Paul. Evangelization was conducted person-to-person, house-to-house by women who reached out to other women, children, freed persons and slaves.

His critique tells us that Christian women (and a few good men) took initiative outside of patriarchal norms because of their belief in Jesus. Women's countercultural exercise of authority in the context of everyday domestic life is one oft-unheralded key to Christianity's rapid expansion.

Women's missionary authority and leadership to and within these extended households would change the face of the Roman Empire.

Which brings me to the current discussion and debate about ordaining women deacons in the Catholic Church. I spent many years researching women and authority in the earliest churches for my first book Crispina and Her Sisters. There is absolutely no question that women served as deacons in both the eastern and western churches. Phyllis Zagano, Gary Macy and others have demonstrated conclusively that early ordination/consecration/blessing rituals were the same for both female and male deacons in late antiquity.

Yet our all-male, 21st century Catholic hierarchy persists in ahistorical hairsplitting by questioning whether early female diaconal ordinations were truly "sacramental" or not.

Their argument fails to address the fact that the theology of the sacrament of ordination changed dramatically in the 12th century when churchmen unilaterally decided that women were no longer capable of being ordained. In fact, sacramental theology was not defined in the church until the 12th century. And even then, different churchmen had different lists of what constituted a sacrament.

One must therefore ask, how valid is it to apply sacramental criteria from 12th century medieval culture to our church's most ancient ministerial practices?

* What is meant by ordination in the early days of the church?

* How not to give in to anachronism when speaking of sacramental theology?

* What does the unity of the sacrament signify, in relation to the documents of 1976 and 1994 (two teachings on the non-ordination of women) and the recent modification of canon law of 2009, Omnium in Mentum (separating functions of the diaconate from priesthood)?

As is by now well known, a new commission on the female diaconate has been appointed, and several members of the new group have publicly opposed the idea of a female diaconate.

But I take heart. Jesus' resurrection power — first proclaimed by Mary of Magdala — is well able to convert a floundering — and stubborn — patriarchal church. Our faith-filled foremothers proclaimed Jesus despite patriarchal pushback and it changed the face of the Roman Empire.

The One who once asked, "Woman, why are you weeping?" will also help us change the face of Roman Catholic Church.

St. Joseph Sr. Christine Schenk, an NCR board member, served urban families for 18 years as a nurse midwife before co-founding FutureChurch, where she served for 23 years. Her book Crispina and Her Sisters: Women and Authority in Early Christianity (Fortress, 2017) was awarded first place in History by the Catholic Press Association. She holds master's degrees in nursing and theology.

Posted by Bridget Mary Meehan at 9:27 AM