Early last Sunday I posted my homily with a focus on Jesus’ command: love God, your neighbors, and others who are different from you. That same day we heard news about the white-supremacist-hate-crime in a Buffalo, NY super-market. Later, another shooting took place in the Geneva Presbyterian Church in Laguna Woods, CA, a Taiwanese congregation.

Those tragedies were two of 198 similar shootings that have occurred so far this year in the United States.The root cause for these heinous evil acts needs our attention. Known as the great replacement conspiracy,1 it has superseded the critical race theory (CRT).

Vice-President of the NAACP Patrice Willoughby wrote: “Unless there is … a holistic approach to stamping out hatred, we are never going to have the type of society in which people are free to live and work without fear.” Christians and others have work to do.

In this week’s gospel (John 14:23-29) Jesus tells his colleagues they should not be afraid of bringing his message of love and justice to everyone because his Spirit will be with them. Elisabeth Johnson, a Lutheran pastor and missionary in Cameroon, wrote that Jesus concludes this farewell speech by wishing his followers shalom, which “signifies more than the absence of conflict; it is a profound and holistic sense of well-being.”

Those who advocate for justice and peace are called to provide for the well-being of all. Although access to basic goods, security, education, and prosperity are human rights there is a growing number of narcissistic government leaders and domestic insurrectionists who either commit evil acts or encourage them. Their aim is to eliminate anyone who threatens their identity, power and authority. The shooting in Buffalo is the latest example. 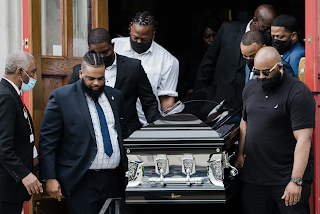 Jesus’ primary concern was to liberate Israelites from ongoing oppression. As a Jew he understood the long history of persecution his people suffered; he wanted to stop it. In fact, he was executed because he challenged Roman empirical autocrats and corrupt religious leaders.

While he sought to break down barriers between people of different tribes, Jesus did not have to deal with all the issues that confront us — gun control, women’s rights, human trafficking, global warfare or racism as we know it. His geographical field of dreams was small but his virtual vision was global and eternal. It would replace the old order and laws with new ones. Love and compassion would prevail.

In commenting on the Book of Revelation 21:10-14, 22-23, Methodist New Testament scholar Israel Kamudzandu described what that new order might look like: “The orderliness of night and day, the changing seasons, physical laws, and biological rhythms [would] reveal the presence of God in human lives.” Every person matters. God’s love is abundant, borderless, not contained nor stamped out. Hatred and evil deeds have no power.

And, in the words of Lutheran pastor Sarah S. Scherschligt, in this last book of the Bible “Scripture ends where it begins, with harmony among humans and creation …. Sin is nowhere to be found. Civilization and nature exist together. There is utter peace in all that God has made.”

That day, when “utter peace” dwells on this fragile planet, is what gives us hope. Advocating for human rights is the antidote to the great replacement ideology and other crimes against humanity.

1 The conspiracy is based on ethno-nationalist false news and fears that people of color will eventually take over the United States rendering white oligarchs powerless.