The Association of Roman Catholic Women Priests is ordaining Catholic women now who are called to serve the people of God, in a new model of inclusive, egalitarian ministry. 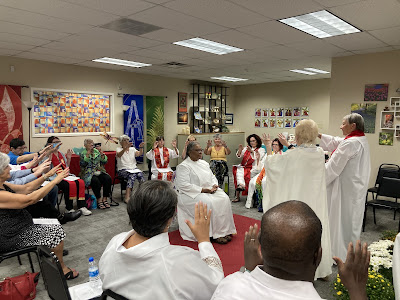 On the eve of Pope Francis’ all-male consistory, Women’s Ordination Worldwide (WOW) shined a bright light on one of the greatest cons-in-history: the exclusion of women from ordained ministry. In a stealth operation on the night of Friday August 26, WOW assembled in the shadow of St. Peter’s to draw attention to those who were not invited to be present.

Following the creation of 20 new cardinals, Pope Francis has called an extraordinary consistory for the world’s cardinals to discuss his new Apostolic Constitution in a closed door session. The reforms significantly expand leadership roles once reserved for cardinals and bishops to laypeople, including women, who will ironically be left out of the meeting. Nevertheless, extraordinary women are making themselves present outside those doors.

On the morning of Monday, August 29, WOW will welcome the male cardinals with some delicate reminders that the world is watching and will see that an all-male consistory is a shameful display of discrimination.

The following quotes are from members of the WOW delegation in Rome:

The following quotes are from members of the WOW delegation in Rome:

“The ever-moving Holy Spirit is calling us to be a more just, inclusive, and transparent church. The church cannot fly with one wing, cannot “journey together” behind closed doors, and cannot model Jesus by excluding women. Jesus counted women as partners in ministry. We ask church leaders to do the same.”  — Kate McElwee, Women’s Ordination Conference (USA)

“We are lighting the way to a renewed model of priesthood and servant leadership in a church where all are welcome and all are equal. We stand outside with and for all women who have no voice and no vote, yet represent more than half the church.” — Kathleen Gibbons Schuck, Roman Catholic Women Priests (International)

“Women, who constitute more than half the Catholic church and the world’s population, are barred from the sacramental life of and highest leadership roles in the church. We’re here to shed light on this injustice.”  — Rhiannon Parry Thompson and Pat Brown, Catholic Women’s Ordination (UK)

“The church calls us to pray for more vocations to the priesthood, yet it chooses to ignore the vocations already here. The church wastes the gifts of women, who are called to sacramental ministries and ready to lead.”  — Alicja Baranowska, WOW individual member (Poland)

“The Vatican’s cover-up of the history of women’s founding role and leadership in the early centuries of the church is a con that must be challenged. Expert theologians, including those inside the Vatican, have concluded there is no scriptural justification for the banishing of women;  it is a choice and it can and must be changed.” — Miriam Duignan, Wijngaards Institute for Catholic Research (International)

Posted by Bridget Mary Meehan at 7:53 AM