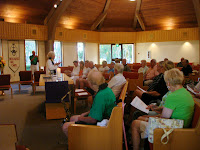 http://www.uscatholic.org/news/2010/07/vatican-prepares-revisions-2001-sex-abuse-norms
Under the new revisions, the "attempted ordination of women" will be listed among those crimes, as a serious violation of the sacrament of holy orders, informed sources said. As such, it will be handled under the procedures set up for investigating "delicta graviora" under the control of the doctrinal congregation.
Bridget Mary Meehan's Response
"Roman Catholic Womenpriests are Validly Ordained: Time for Partnership and Equality in the Catholic Church"
My dear brothers in Christ in the Vatican,
Roman Catholic Womenpriests are validly ordained and you know it! Roman Catholic Womenpriests have not "attempted ordination", rather our orders are valid because, our first bishops were ordained by bishops with apostolic succession. It puzzles me to hear that you are placing this newest condemnation in your guidelines/responses to clergy sex abuse in the Catholic Church. Talking about comparing apples and oranges. Placing the ordination of women in the same category as criminal acts by clergy sex abusers boggles the mind! Your attempt to put womenpriests on a par with sex abusers in this proposed document that has been leaked to the press is outrageous and will backfire. It appears that Roman Catholic Womenpriests are the Vatican's worst nightmare.
Womenpriests are part of a grassroots renewal that is occuring in the Catholic Church, we are not the problem. Let's be clear it is bishops in a secretive, closed system who shielded priests who were sexual abusers in a global sexual abuse crisis that implicates the Vatican that should be held accountable, and that needs major reform.
http://www.politicsdaily.com/2010/07/09/vatican-rules-ordaining-women-priests-a-crime-like-sex-abuse-of/?sms_ss=email
Roman Catholic Womenpriests are living prophetic obedience to the Spirit who is calling us disobey an unjust law that discriminates against women. Like Rosa Parks, we are gutsy women and men who will not be moved by threats or punishments by the hierarchy whether here or in Rome.
Perhaps, you are following your normal response to new movements including religious orders -ignore- warn- threaten- condemn- punish- excommunicate- dialogue - accept- promote- and even "canonize", in some cases, the members of the order or movement that were formally vilified. Right now, the Vatican's tactics of harsh condemnation of women priests does not witness the example of Jesus, who was a friend and supporter of women in ministry!
Jesus taught radical equality, women were among his closest disciples. St. Paul praised women such as deacon Phoebe and apostle Junia as prominent leaders in the community. Women presided at Eucharist during the early centuries of Christianity , and were ordained, as you know. You are on the wrong side of history, dear brothers- again!
The good news is that so many people are ready for a renewed priestly ministry in a more open, inclusive accountable and transparent church. They do not support a hierarchy or Vatican who denigrates women. My advice to you, our brothers in Christ, is to support justice and equality for women in all ministries and offices in the church including Holy Orders.
How many excommunications and condemnations can you issue against women priests and our supporters? We are your sisters and brothers in Christ. We are following our consciences, and no earthly power will shake our commitment to a renewed priestly ministry in a Christ-centered, Spirit-empowered church.
Roman Catholic Womenpriests are a breath of fresh air to the Catholic Church which you, our brothers , in the hierarchy, should welcome. We are offering a gift of dedicated service to the Catholic Community. Catholics no longer are waiting for permission to live Jesus dream of Gospel equality where women and men are partners and equals in ministry in grassroots communities . It is a reality now.
Yet, my brothers, I must admit that your punishments and condemnations have brought many blessings to us too. We are growing not only in numbers, but also reaching alienated Catholics who rejoice in coming home to a warm and accepting Catholic family where sacraments are offered to all. Even bad news from the Vatican often becomes good news when people find out about our the Womenpriests Movement!!
We love the church, and are not leaving it. We are not in schism, but I think that you, our brothers, have separated yourselves from the people of God by your condemnations, edicts and harsh punishments. Most of all, we must ask ourselves what would Jesus do?
Roman Catholic Womenpriests are visible reminders that women are equal images of God, and that our God truly has a feminine face.We are here to stay and serve the members of our church with joyful enthusiasm.
Perhaps, that is why you, our brothers, in the Vatican and elsewhere are so threatened.
Do you see Roman Catholic Womenpriests shaking up the hierarchical model, as a challenge to the good old boys club? Perhaps, this is just what is needed at this time in the history of our church. Womenpriests are working to transform our church into a more open, participatory community of equals that is open, transparent , accountable --inclusive and welcoming to all.
Let us walk together as companions on the journey who deeply love our church, and are committed to justice, partnership and equality as the model of ministry Jesus promoted in the Gospel . Bridget Mary Meehan, sofiabmm@aol.com
Posted by Bridget Mary Meehan at 12:43 AM

This story is truly disturbing. The complete damage which clerical abuse does to the victim is in no way comparable to the violation of a "church tradition." When will the hierarchy ever let go of this senseless use of power to intimidate and threaten? I pray God it may happen soon.
David