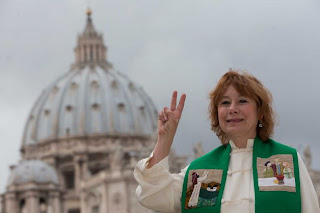 
Demonstrations took place across the United States and internationally to protest the male-only conclave to elect the next pope.
Members of a church in Sarasota sent up their own smoke signals Tuesday -- not black or white, but pink.
They gathered at the St. Andrews UCC Church in Sarasota. The vigil was one of many held on Tuesday around the globe. Not all were so peaceful though: a melee ensued outside the Vatican Tuesday when two female activists who went topless were dragged away from St. Peter's Square.
The Sarasota group, though, gathered in a circle to pray, and they say their hope is for a more progressive pope.
"There's one point plus billion Roman Catholics. 500 million women. All cultures, all languages, throughout the world living today, are not represented in the conclave. Not one woman," said Katy Zatsick, with the Mary Mother of Jesus Inclusive Catholic Community.
Zatsick says she hopes for a "Pope John XXIV" -- someone who models himself after Pope John XXIII, who presided over the Second Vatican Council in the 1960s, which ushered in major changes for the Catholic Church.
The cardinals at the Vatican will resume their voting process Wednesday morning.