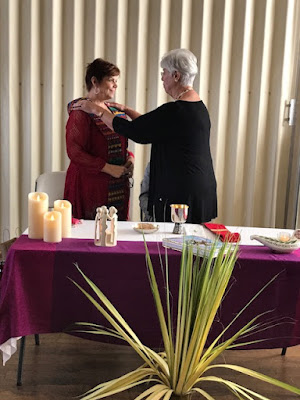 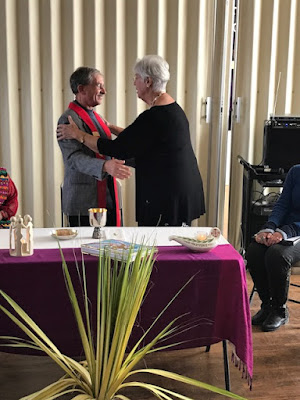 The community blessed the palms at the beginning of the liturgy.

This blessing can be heard coming from a long way off.
This blessing is making its steady way up the road toward you.
This blessing blooms in the throats of women,
springs from the hearts of men,
tumbles out of the mouths of children. 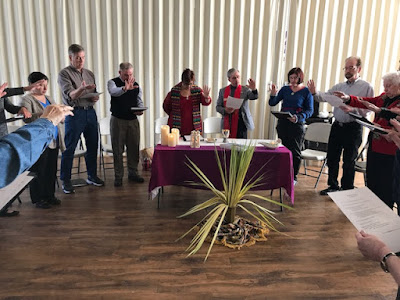 This blessing is stitched into the seams of the cloaks that line the road,
etched into the branches that trace the path,
echoes in the breathing of the willing colt,
the click of the donkey’s hoof against the stones.
Something is rising beneath this blessing.
Something will try to drown it out.
But this blessing cannot be turned back,
cannot be made to still its voice,
cannot cease to sing its praise of the One
who comes along the way it makes. 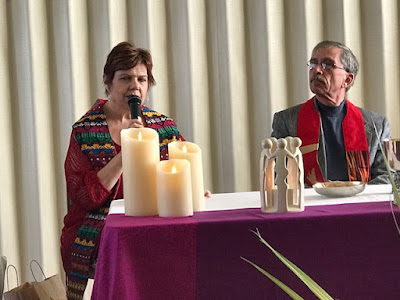 The first reading was from the Gospel of the day. The response between the readings by Joyce Rupp and the second reading by Richard Rohr are printed below along with Jim Marsh’s reflection on the readings. 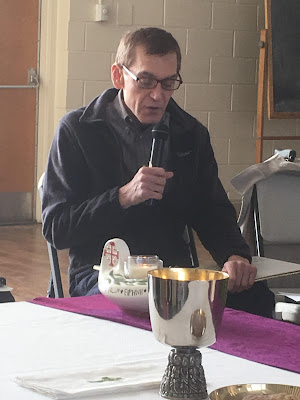 Response before 2nd Reading
Response to each: I rest in the Peace-Giver’s Presence.

When inner turmoil and conflict threaten my peace of mind and heart …
When my life is overly full and I wonder how I will complete what is required …
When I enter into the pain and suffering of the world’s lack of peace …
When I hurt for friends, relatives, and others who are distressed …
When fear of the future rises up and the way ahead is uncertain and unsettled …
When my life appears empty and loneliness taunts me …
When I live with concern and apprehension over unresolved issues …
When I feel a great distance from the One who is the fullness of peace …

All: The peace of the Life-Giver is with us. Amen!
-taken from Prayer Seeds by Joyce Rupp 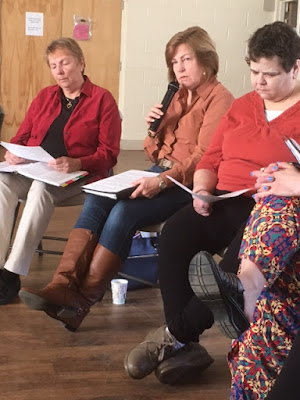 Second Reading - "Christ" Is Another Word for Everything
By Richard Rohr, OFM

When Christians defined Jesus in a small way—as a mere problem solver for sin—we soon became preoccupied with sin itself, which is a largely negative foundation. We became blind to much else going on in this world except sin and its effects ….  With such a negative anthropology and without inherent human dignity, it is very hard for even a good theology to succeed.  We must start where the Bible begins in Genesis 1: “It was good, it was good . . . it was very good” (Genesis 1:10-31).

Yet many Christian leaders and churches focus on shame and guilt, atonement and reparation, as if we were children frightened of an abusive father. Is there no greater meaning to our individual lives and history than to be chastened, corrected, and “saved” by God? Is there no implanted hope and goodness to first celebrate? If we start with original sin, our worldview is scarcity rather than abundance.

Didn’t Paul tell us “There is only Christ: he is everything and he is in everything” (Colossians 3:11), so that “God may be all in all” (1 Corinthians 15:28)? What cosmic hope and direction we were offered! But our calculating minds have a very hard time knowing how to live inside such abundance. Grace is the consummate threat to all self-hatred.

Christians formally believed that somehow Jesus was “fully human and fully divine” at the same time. But with dualistic thinking, the best most of us could do was to see ourselves as only human, and Jesus, for all practical purposes, as only divine. We thus missed the whole point, which was to put the two together in him and then dare to discover the same mystery in ourselves and in all of creation! That is how Jesus “saves” us and shows himself as the “pioneer and perfector” of our faith (see Hebrews 12:2)—and also the model, the guarantee, the promise, and the pledge, to use some of Paul’s many fine metaphors for Jesus.

Christianity, a religion based on the radically inclusive and compassionate vision of Jesus, has had a very different philosophy and practice in its actual history.  Jesus was held hostage and misused by culture, nation-building, and prejudice, I am afraid. He ended up being neither Jesus nor Christ!

Rather than being taught that we can and should follow Jesus as “partners in his great triumphal procession” (2 Corinthians 2:14), we were told to be grateful spectators and admirers of what he once did. Instead of a totally “Inclusive Savior” we made Jesus into an object of exclusive and exclusionary worship. Then we argued and divided over what kind of worship he preferred. Jesus never asked for worship, only that we “follow” him (Mark 1:18) as fellow attractors (“fishers of people”) and partners in “his triumphal procession.”

These are the inspired thoughts of Richard Rohr, OFM … Let the community respond AMEN! 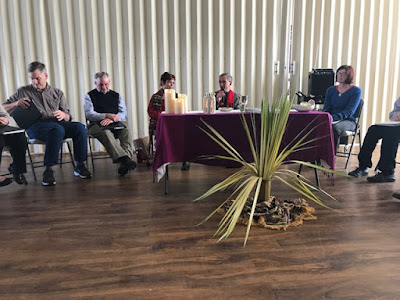 Matthew wrote his Gospel some fifty years after the crucifixion.  His content was certainly not historical since many of his followers/disciples fled. Like his counterparts, Matthew was writing about the meaning and the message of Jesus as his community understood it. Matthew’s Jewish-Christian community had become convinced that Jesus was the Messiah, the anointed of God.
Scripture scholar and theologian John Shelby Spong tells us that this Gospel is patterned after the Jewish liturgical year of the synagogue.  The passion, death and resurrection of Jesus comes in the first month of the Jewish calendar, the month in which they celebrate Passover.
Converts to Judaism were instructed what it meant to be a Jew during the last months of their calendar year and were inducted during the Passover celebration, the meal during which the history of the Hebrew people was retold.  Is it any wonder how the season of Lent came to be – it’s the time of instruction and preparation for baptism of new recruits and a time of renewal for the whole believing community of Christians.
Let’s try to imagine the environment on that day in this Gospel narrative. It was Passover and no doubt, pilgrims were entering the city through all its gates in excitement, greeting one another, perhaps even singing songs.  Pilgrimages and journeys are often times challenging and festive occasions.  Think about the recent Women’s March on Washington for those of you who attended…. I think back to 1987 when we first unveiled the AIDS Memorial quilt on the Washington mall, and I also think about the stories shared by several friends who have walked the Camino de Santiago (Compostela) in Spain.

Matthew has Jesus riding into Jerusalem on a donkey to fulfill the prophecy of Zechariah about the coming of the Messiah.  Now think about the Roman Imperial army arriving as well on their horses displaying their weapons of war.  Could Jesus’ arrival on a donkey mean something more—perhaps a political statement proclaiming the end of imperial violence and promoting “God’s new reality” of justice and peace, the kin-dom which was Jesus’ life mission?   Jesus was committed to promoting a new and different reality—a more just, nonviolent and human society. No wonder they wanted to kill him and his message.

This is a good week to recall the wonderful stories we have heard these last five weeks of Lent beginning with Jesus’s temptation.  Was he tempted to throw in the towel and give up on his mission?  Did he know his life would end so violently?  The story of his transfiguration/transformation and mindfulness that “He is God’s beloved.” His encounter with a women at a well, a despised Samaritan, but nonetheless also God’s beloved.  His healing of a blind person perhaps to see beyond gender, race, sexual orientation, ethnicity, and all other biases.  And finally, his bringing forth Lazarus from a tomb of darkness into the light of life because there’s work yet to be done for “God’s glory.”

My friends, Jesus, “the human being, the beloved of God” is our model and mentor. Whatever one human being can do, other human beings can also do; and Jesus assures us we will do even greater things than he. We Christians follow Jesus by embracing his spirit and adopting his passion. This means bringing truth where there is deceit and lies, ending cruelty in all its forms, and being compassionate to those who suffer and are the most vulnerable among us.

This is a good week to ponder not just the last events in the life of the historical Jesus, but all those transforming, healing, resurrection moments in our lives.  We are one people (whether Jew, Muslim, Buddhist, Christian, …) with one Abba/Amma God, called to love one another no matter what happens.  How are we called, you and I, to live on this planet with a generous, abundant, fearless spirit that mirrors the Divine?

What did you hear? Thank you for being a model to me of what it means to be a Christian—the face of God! 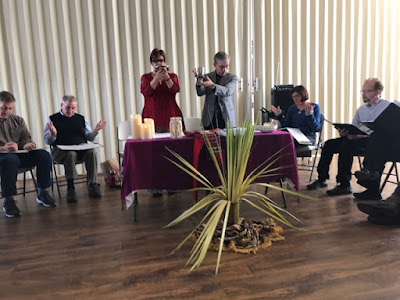