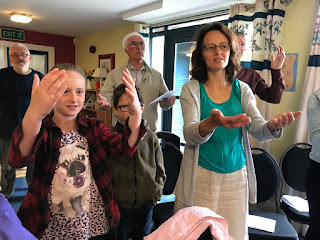 In response to Irish Priest Fr. Roy Donovan's, call for suspending ordaining permanent deacons, until Pope Francis makes a decision on women deacons, Thomas DuBois, a deacon based in Columbus, Ohio and executive director of the National Association of Diaconate Directors. said: "The role of the deacons is not that of a mini-priest, available to preside at weddings and baptisms while preaching at Mass. The ancient order, which has its roots in the early church, is devoted to meeting the needs of widows, orphans and the poor of the Christian community, "It was never the intention of the church to use deacons as replacements for priests," DuBois said in an article in the National Catholic Reporter.

I disagree with Deacon DuBois. The role of the deacon in the early church was to take care of widows and those in need, but it also included liturgical duties such as baptizing adults and leading,  communities of faith. If we followed Mr. DuBois definition of the role of deacon, women are already functioning as  unrecognized and unpaid deacons because they are helping the poor and acting as builders of community in diverse ministries in their local parishes.

In many Catholic parishes permanent deacons also function as ministers of baptism, wedding officiants, and presiders at funeral.  They function as mini-priests in most Catholic communities in the U.S.. This is the reason they are being ordained - to fill in the gap-created by the shortage of priests. There is no reason women cannot do these ministries, and in some  places in the world where they are no priests or male deacons, women do preside at weddings and funerals.

I agree that clericalism is a huge problem and the entire church needs to move from a top-down model to a community ecclesial model. However we are a sacramental church and sacramental ministry is important. In our inclusive Catholic communities where women deacons and priests serve, we have created a new model of mutual partnership in ministry within a community of equals. For example, the voice of the people is heard in dialogue homilies, everyone prays the Eucharistic Prayer, not just ordained etc.

I support Fr. Roy Donovan of the Association of Catholic Priests in Ireland for naming the elephant in the church, women priests.

According to the Irish Times, on women priests, Fr Donovan said he believed “a woman could celebrate the Eucharist even better than a man being more familiar with the shedding of blood. A woman saying ‘this is my body, this is my blood’ can give more meaning to the Eucharist than any male celibate.”He also knew women “who feel it in their bones and souls that they have a call to the priesthood”. When I was in Ireland, I had two phone conversations with Fr. Roy Donovan about women called to priesthood.

This is the heart of the issue: a renewed priestly ministry where all are equal and all are one in the community of the baptized.

In summary, we have a double standard in the church today. If we follow Mr. DuBois's definition  of the role of the permanent deacon in the Catholic Church ( "devoted to meeting the needs of widows, orphans and the poor of the Christian community" ) then women are serving as deacons now, so why not celebrate their diaconal ministry through ordination? it is time to ordain women deacons as a first step toward the full equality of women in the church. Anything less is sinful and sexist. The future of the church we love is the responsibility of all of us. Bridget Mary Meehan,  ARCWP, www.arcwp.org


(Fr. Roy Donovan of the Association of Catholic Priests in Ireland said the church should wait on ordaining deacons pending a commission's study on women deacons, but American clerics and a Canadian deacon NCR contacted said the idea is unfair to deacons already on the path to ordination and misconstrues their role.


He "misunderstands the purpose of the permanent diaconate," said Thomas DuBois, a deacon based in Columbus, Ohio, who is executive director of the National Association of Diaconate Directors. Bishops who have a diaconate program "are not just training clerics," he said."
Related:
NCR Podcast: Envisioning peace in Afghanistan, Irish push for women deacons