"Resignations, Rome meetings and investigations: A week of major developments in the sexual abuse crisis" by Michael J. O'Loughlin, America 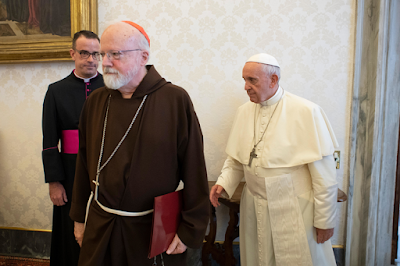 
Since then, the retired Washington archbishop has faced more allegations of sexual abuse and harassment against adults; a grand jury report in Pennsylvania laid out details of alleged abuse against 1,000 children in that state; a former papal diplomat accused the Vatican of a cover-up and called on the pope to resign; and new allegations of mismanagement have been leveled against U.S. bishops.
Events in the United States and around the world prompted Pope Francis to announce that he is holding an unprecedented global meeting of church leaders to address sexual abuse in February. In the meantime, here is a roundup of developments in the crisis from the past several days.

Washington’s archbishop, Donald Wuerl, announces he will seek to step down

Cardinal Donald Wuerl, the archbishop of Washington who for weeks has faced calls to step down because of his record in managing abuse allegations as the bishop of Pittsburgh, wrote in a blog post on Thursday that he will meet with Pope Francis in the near future and urge the pope to accept his resignation.
“Those called to serve the church in a leadership capacity must recognize that we are to lead not only by word, but also by personal action. We must be prepared to do whatever is needed, including stepping aside,” he wrote. “This action on my part is an essential aspect of the healing so that this archdiocesan church we all love can move forward.”
The 77-year-old cardinal submitted his resignation nearly three years ago, as is customary when a cardinal turns 75. But he is an adviser to the pope and a member of the Congregation for Bishops who, until recently, enjoyed a reputation as a solid manager—presumably among the reasons the pope has declined to accept his resignation in the past.
Trouble for Cardinal Wuerl began in June when his predecessor, Archbishop McCarrick, was removed from public ministry by Pope Francis after a claim of sexual abuse against a minor from decades ago was substantiated. Later, other people claimed they had been victimized by Archbishop McCarrick as adults.
Cardinal Wuerl maintained he was unaware of any misconduct claims against Archbishop McCarrick.
Cardinal Wuerl maintained he was unaware of any misconduct claims against Archbishop McCarrick.


His challenges were compounded following the release in August of an 800-page grand jury report that detailed decades of sexual abuse against minors committed by Catholic priests in Pennsylvania.
When Archbishop Carlo Maria Viganò, the former papal ambassador to the United States, released a 11-page letter on Aug. 25 calling on Pope Francis to resign over the Archbishop McCarrick case, Cardinal Wuerl faced even more pressure. Archbishop Viganò accused Cardinal Wuerl of lying when he said he was unaware of accusations against his predecessor.
Cardinal Wuerl initially defended his record as archbishop of Pittsburgh, a post he held from 1988 to 2006. He noted that he removed many accused priests from ministry, even fighting with the Vatican in one case. But critics said he did not do enough, leading to protests from victims’ advocates, Catholic school teachers in Washington and even his own clergy.
On Thursday, Cardinal Timothy Dolan, the archbishop of New York and a previous president of the United States Conference of Catholic Bishops, defended Cardinal Wuerl during an interview on CNN. Cardinal Dolan called Cardinal Wuerl “a good friend” and said “he’s a tremendous leader.
“I kind of hope he doesn’t resign. We need him. He’s been a great source of reform in the past,” he added. “I trust him enough that if he thinks he needs to resign for the good of the church, he will. And I would respect that decision."
Cardinal Wuerl has not announced when he would meet with Pope Francis, and the Vatican said it is preparing a response to Archbishop Viganò’s claims.


The cardinal announced in August that he wanted to meet with the pope to discuss the case of former cardinal McCarrick. Cardinal DiNardo said he planned to ask the Vatican for an apostolic visit, led by laypeople, to investigate who knew what and when about the former cardinal. Many Catholics are wondering how then-Archbishop McCarrick rose to one of the most prominent posts in the U.S. church if Vatican officials knew of complaints against him as early as 2000, as the Rev. Boniface Ramsey alleges.
Cardinal DiNardo, who is also facing accusations of mishandling abuse claims (see below), spoke to Catholic News Service following the Vatican meeting, but he did not confirm if he asked the pope about launching an investigation.
In a statement on Aug. 16, Cardinal DiNardo said the U.S.C.C.B. Executive Committee had established three goals: “an investigation into the questions surrounding Archbishop McCarrick; an opening of new and confidential channels for reporting complaints against bishops; and advocacy for more effective resolution of future complaints.”
When asked about the three priorities after the meeting with the pope, the cardinal told the Catholic News Service, “I think we can make movement on those things. I think we have to do it step by step.”

The United States is not alone when it comes to abuse and charges of cover-up by church leaders.
Authorities in Chile continue to investigate allegations of abuse there. A group of Catholic nuns in India accused a bishop there of committing rape. Church leaders in Germany are bracing for the release of a report detailing thousands of past cases of abuse.
To address these and other claims, Pope Francis announced on Sept. 12that the heads of bishops’ conferences from around the world will gather in Rome next February.
Little is known so far about what will be discussed at the meeting, but a spokeswoman for the Vatican said it would address “the prevention of the abuses of minors and vulnerable adults.” There is no word on whether experts in sexual abuse will be invited to brief bishops or what outcomes may be possible.


In March, Bishop Malone released a list of 42 priests he said had been credibly accused of sexual abuse. But a Sept. 12 report by Buffalo TV station WKBW said the real number may be higher than 100.
WKBW said the diocese may have changed the criteria for who to include on the list of priests so that it could claim no credibly accused priests were still in active ministry. According to the report, the initial list had more than 100 priests, including members of religious orders, deceased priests accused by a single victim and an “additional 20 accused priests who were kept off the list because they did not fit the diocese’s narrowly defined ‘categories’ for disclosure.”
That report follows claims that Bishop Malone, a former auxiliary bishop to Cardinal Bernard Law in Boston, mishandled allegations against other priests in Buffalo. The bishop has denied any wrongdoing.

On Wednesday, the Associated Press reported that Cardinal DiNardo, president of the U.S.C.CB. and one of the four church leaders who met with Pope Francis this week, is being accused of mishandling allegationsof abuse by a priest in the Archdiocese of Galveston-Houston, where he is archbishop.
The Rev. Manuel LaRosa-Lopez was arrested on Sept. 11 in Conroe, Tex. He is accused of fondling two people when they were in their teens and he was the pastor of a church. The two alleged victims brought their complaint to Cardinal DiNardo as early as 2001. The archdiocese said it reported the claims to the Texas Child Protective Services.
RELATED STORIES

Church sex abuse crisis: What you need to know
America Staff
Despite the allegations of abuse, Father LaRosa-Lopez was kept in ministry. He is currently the pastor of a church in Richmond, Tex., and the archdiocese vicar for Hispanic ministry.
Cardinal DiNardo has not responded to charges that he mishandled the church’s response.
Another church leader criticized for mishandling abuse claims is Cardinal Seán O’Malley, who was appointed archbishop of Boston in 2002 to repair the harm caused by the decisions of that city’s previous church leaders to reassign priests known to be sexual abusers.
As head of the Vatican’s sexual abuse commission, he has won praise for pressing Rome to move more swiftly on allegations of abuse and mismanagement by other bishops. But in recent weeks, critics have said that warnings to the Boston archbishop about then-Archbishop McCarrick went unheeded. The cardinal said he never received information about those claims because the Vatican commission is charged with making recommendations, not investigating claims. But Cardinal O’Malley said this week he now plans to “personally review”each new claim that comes to his office.
Critics have said there is no clear path for those who believe a bishop has mishandled allegations of abuse to report their concerns.

….and the abuse crisis is unlikely to subside anytime soon

Some church leaders have called on dioceses and religious orders to release their files related to sexual abuse on their own before civil authorities step in. But time may be limited: Law enforcement officials in at least eight states have either launched similar investigations to Pennsylvania or are considering them.
Material from the Associated Press and Catholic News Service was used in this report.
Posted by Bridget Mary Meehan at 8:43 PM