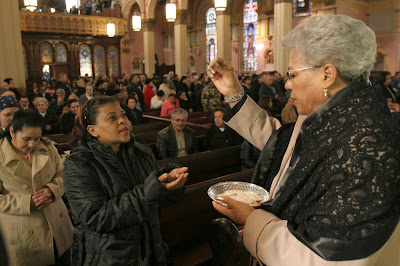 My Response Yes, of course, women deacons will lead to women priests! This is a no-brainer! So many women are prepared, have the ministerial experience, all they need is ordination!
The bishops know they are ready, willing and able. In fact, many women are functioning as de facto deacons now!
In an institutional Church that is imploding due to the worldwide sexual abuse crisis, women deacons will bring new wine  into old wineskins and help bail out a Church in  free fall.
However, what is needed is a renewed model of priestly ministry and a renewed model of ecclesial ministry in an inclusive, empowered, egalitarian Church. This is what the international movement of Roman Catholic Women Priests offers!
We  are leading the way toward the full equality of women by ordaining women as priests. The ordination of women deacons is only the first step. Our bigger challenge is to change the clerical culture into a new paradigm of equalitarian ministry rooted in our baptism,  not to add women to the old boys club! Bridget Mary Meehan ARCWP


An extraordinary minister of the holy Eucharist distributes Communion during Mass at Transfiguration Church in the Williamsburg section of Brooklyn, N.Y. (CNS photo/Gregory A. Shemitz)
As Pope Francis mulls a report about women deacons in the early church, a new survey reveals that at least when it comes to U.S. bishops, support for ordaining women as deacons remains uneven.
According to a report released by the Center for Applied Research in the Apostolate at Georgetown University on Jan. 22, just 33 percent of bishops in the United States think the church “should” ordain women as deacons.
Late last year, a papal commission wrapped up its work studying whether the early church ordained women as deacons and passed its findings on to Pope Francis. Two of the commission’s 12 members—Phyllis Zagano and Bernard Pottier, S.J.—said in an interview with America last month that their own research supports the idea that women were ordained deacons in the early church.
If the path forward for women deacons follows a similar route as the reintroduction of the permanent diaconate following the Second Vatican Council, the pope would first have to acknowledge that women deacons existed in the early church. Then national bishops conferences would decide if they wished to seek permission to reinstate the practice in their countries. The final decision for how each diocese would approach the issue would be made by individual bishops.
Most bishops seem opposed to the idea altogether, with just 41 percent saying they believe it is “theoretically possible” to ordain women as deacons.

If Francis were to follow that process, 79 percent of U.S. bishops say in the CARA survey, they believe the U.S. Conference of Catholic Bishops would allow individual bishops to decide for their dioceses. If given that option, 54 percent of U.S. bishops say, they would “consider” ordaining women as deacons in their dioceses.
But most bishops seem opposed to the idea altogether, with just 41 percent saying they believe it is “theoretically possible” to ordain women as deacons and only 33 percent saying they believe the church “should” ordain women as deacons. Just 27 percent of bishops think the church will move ahead with ordaining women to the diaconate.
RELATED STORIES