NCR: It's time to end male supremacy in the Catholic Church 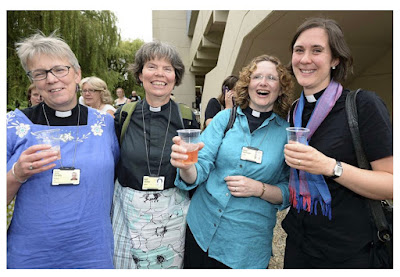 In these challenging times, I am filled with hope to see so many people in our country speaking out about racism and white supremacy. It seems that an increased awareness of the need for equality is taking hold where before we saw apathy and indifference.
Another form of supremacy — male supremacy — has run rampant in our world for far too long. Having served as a Catholic priest for 40 years, I am well acquainted with the injustices that result when institutional power rests solely in the hands of an elite group, in this case, the all-male priesthood. As the world around it struggles toward equality, the church hierarchy clings to its hold on power, trotting out the same tired justifications for women’s subordination, much of it rooted in pseudoscience and the ignorant musings of medieval philosophers.
Catholic male supremacists — and I do not think it is an exaggeration to describe them as such — believe that the church belongs to them. In recent years we have witnessed the Vatican engage in disingenuous attempts to find an acceptable "role" for women in the church, believing that a few cosmetic changes might convince women to stop agitating for equality. These men see women as lesser, suited only to do the work they view as beneath them.
Consequently, Catholic women are relegated to providing the ruling male elite with free or cheap labor, either as nuns, volunteers or church employees working for poverty wages. Women who aspire to ordination, the only route to a meaningful place in the hierarchy — even those who dare to speak openly about such a possibility — become the targets of a deeply misogynistic priesthood with the single aim of silencing the person who dared to question women’s subservience in the church.
In 2012, 40 years after I was ordained a Catholic priest in the Maryknoll Order, I was expelled for such an offense, the Vatican accusing me of creating "grave scandal" by publicly supporting women’s ordination to the Catholic priesthood.
A year before, I had sent a letter to each member of the Maryknoll community, believing that because they had experienced God's call to priesthood, they too would feel compelled to stand in solidarity with the women called to serve God’s people as a Catholic priest.
Many of my fellow priests responded with stony silence, others reacted with anger, behaving as if I had sided with the enemy. A small number admitted to supporting women's ordination but loathed to risk the loss of their status and power by taking a stand. Since that time, I have come to see that I had severely underestimated both the clergy's addiction to power and the depth of sexism and misogyny embedded in the all-male priesthood.
Today, as I watch people fill the streets to demand an end to racism and a dismantling of the institutional power that allows white supremacy to go unchallenged, I can only hope that one day Catholics will similarly rise up and demand an end to male supremacy in the church with the same courage and determination.
[Roy Bourgeois is a Vietnam veteran, a Purple Heart recipient, and the founder of the School of the Americas Watch movement. For more information about his struggle for women's equality in the Catholic Church, visit: www.roybourgeoisjourney.org.]
Posted by Bridget Mary Meehan at 7:09 AM