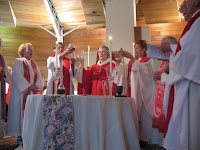 http://www.huffingtonpost.com/angela-bonavoglia/at-easter-church-expels-w_b_850257.html?ref=email_share
..."And neither excommuniaton nor laicization has been threatened against any of the scores of Philadelphia priests who Cardinal Justin Rigali, under public pressure, was forced to relieve of duty, following the recent release of a second damning Grand Jury report. ... even after the diocesan authorities knew of the horrific allegations against them -- that they had repeatedly raped and sodomized children, turning one child into a sexual slave who they pimped out from priest to priest..."
"This same Rigali in 2006 castigated Eileen McCafferty DiFranco for daring to be ordained a Roman Catholic priest, accusing her of causing "confusion and discord," charging that if she celebrated a sacrament, she would "further exacerbate the public scandal." This was at the time of the first Grand Jury report, which described one of the most astounding histories of child sex abuse of any diocese in the country. The list of crimes by more than 60 priests included a teenage girl groped by her priest while she lay immobilized in traction and a boy who awoke intoxicated in a priest's bed to find the priest "sucking his penis while three other priests watched and masturbated."
"Bourgeois was incredibly engaging and moving on the Barnard panel, as he is in the film -- humble, deeply committed to women's rights in the Church, immovable in his position of support. But what struck me, what touched me most deeply was his concern, his wish and his deep disappointment that his fellow priests have refused to step forward and join him in this fight. They remain silent, despite knowing in their hearts how unjust and discriminatory is the Church's position, which flies in the face of church history, archaeological evidence and even a Pontifical Biblical Commission that found insufficient Scriptural grounds to exclude the possibility of women's ordination..."
Bridget Mary's Reflection
Angela Bonavoglia hit the nail on the head! The hierarchy's strong arm tactics in response to women priests and our supporters, including Fr. Roy Bourgeois, is a last ditch effort to resist the movement for the full equality of women in the church. It is is doomed to failure. The real scandal is the failure of the Vatican to make the structural changes that will address the pedophile crisis. The real scandal is the church's protection of pedophiles who have harmed raped, sodomized and sexually abused Catholic youth. Fr. Roy is a prophet leading the way toward justice for women in our church. While only a handful of priests are following his example in the United States, there are a few glimmers of hope that the tide is changing. The Irish Priests Association and German theologians have raised the issue of women's equality in the church. In South America, a priest, stood with us as we ordained the first women there. It is my hope that the example of Fr. Roy Bourgeois will inspire more priests to come forward and support Roman Catholic Women Priests. As Martin Luther King reminds us that injustice anywhere, threatens justice everywhere! Like Rosa Parks, who refused to sit in the back of the bus, Roman Catholic Women Priests are refusing second class status in our church. We are leading the way toward a new era of justice and equality for women in the church. This Easter, we celebrate the courage of the women who stood by Jesus during his sufferings and death, and were the first witnesses to the resurrection. We are following the path of Mary Magdala, the apostle to the apostles, who was called by the Risen Christ to go and tell the good news. So too, women priests are good news for the people of God who are ready for partnership and equality. Like the male disciples- locked up in fear-the hierarchy is afraid and resists, but a new Pentecost will come!
Bridget Mary Meehan, RCWP
sofiabmm@aol.com
http://www.associationofromancatholicwomenpriests.org/
Posted by Bridget Mary Meehan at 4:14 PM