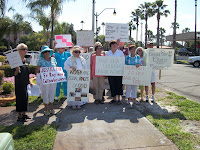 "Holy Week in the Catholic Church was met with protests Tuesday in Venice in an effort to let women become priests. A group named "Call To Action" along with others held signs in a peaceful protest outside Epiphany Cathedral this morning. They greeted churchgoers and more than 200 priests from across the diocese who were celebrating Mass.Protesters are upset over the news a priest will be removed from the priesthood, because of his support for women becoming priests.That’s something protestors say will one day be accepted. “I think that female Roman Catholic priests are leading the way to a new renewed catholic church. The Vatican is kicking and screaming right now about us, but one day they too will recognize us as faithful witnesses to the gospel," says Bridget Mary Meehan."

A Vigil for Justice and Equality
Tuesday April 19, 2011
The Holy Week mass to bless the chrism oil for baptism, confirmation, and ordination was held today in the Epiphany Cathedral in Venice, Florida. As the procession of 200 priests, the bishop, and many other dignitaries prepared to enter the church, our vigil for justice and equality began.
Call to Action leaders requested quiet and peaceful vigils at chrism masses across the country to support Fr. Roy Bourgeois and the ordination of women. As a priest and member of the Maryknoll community for 44 years, Fr. Roy was threatened with expulsion from Maryknoll and laicization unless he recanted his support for women’s ordination. In his written response, Fr. Roy held fast to the primacy of conscience and his vision of women’s ordination as an issue of justice within the Church. Isn’t this how Jesus would deal with these issues today? The vigils were a way to support Fr. Roy who respectfully asked that his “fellow priests, bishops, Church leaders in the Vatican and Catholics in the pews speak out and affirm God’s call of women to the priesthood.”
Thirty-nine supporters of Fr. Roy and women’s ordination lined the sidewalks next to the cathedral. They represented the members of Southwest Florida Chapter of CTA, the newly-formed Peace River branch, the Venice Area Voice of the Faithful, and Mary Mother of Jesus Inclusive Catholic Community. Vigil participants were an impressive group that included vested women priests and Bishop Bridget Mary, as well as individuals from West Palm Beach in Florida, Ontario in Canada, and snowbirds from many states.
The Diocese of Venice made certain that we were greeted by a Venice police captain and lieutenant. The police cars expanded to four when one of the vigil participants offered Fr. Roy’s letter to a staff person from the bishop’s office. He immediately informed us of the private property boundaries and his intention to enforce them. We remained quiet and respectful. Thus we were relegated to the sidewalk on one side of the cathedral. Our signs could be seen by the priests, but we were disappointed that we were not allowed close enough to give each one of them Fr. Roy’s letter. As the procession continued into the cathedral, many of the priests looked toward the vigil participants with varying positive and negative nonverbal communications. Most of the people attending the mass had the opportunity to talk to us and see our signs. Their responses were mostly indifferent. Several were curious or friendly.
Supporting Fr. Roy and women priests in this way was the first Call to Action for the new Peace River branch of the CTA Southwest Florida Chapter. We believe it was a great success. And it could not have been so without the members of CTA, Venice area VOTF, Mary Mother of Jesus, the Association of Roman Catholic Women Priests, and each of the vigil participants. Thank you!

Signs included:
I support Fr. Roy and all priests
Justice for Fr. Roy and Catholic women
Father Roy: priest and prophet
Save our Church--Ordain women
Wome n are equal images of God
Support Fr. Roy & Justice in the Church of Jesus