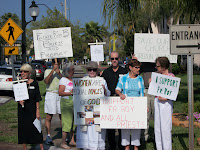 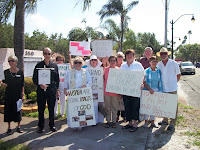 On a sunny morning on April 19th, at 10 am, an enthusiastic gathering of Catholics held a Protest Vigil before the Chrism Mass in front of Epiphany Cathedral in Venice Florida in support of a well-known Maryknoll priest, Roy Bourgeois for his support of women women priests in the Catholic Church. This prayerful vigil was scheduled to concide with the Chrism Mass where the male priests gather with the bishop who blesses the oil for use during sacramental celebrations. Michael and Imogene Rigdon from the new chapter of Call to Action Peace River and Ellen McNally from Call to Action Southwest Florida organized the Vigil.Roman Catholic Women Priests, Katy Zatsick and Bridget Mary Meehan dressed in their albs and stoles, joined the assembly waving signs and banners that expressed solidarity with Fr. Roy and women priests. Protest Vigils were scheduled across the U.S. in front of Cathdrals in a dozen dioceses.
Fr. Roy Bourgeois has been threatened with dismissal from the Maryknoll Order. This vigil come in response to news last week that Fr. Roy Bourgeois, a Maryknoll priest and founder of the School of the Americas Watch, refused to recant his views on women’s equality in the church and will be removed from the priesthood.
A recent New York Times poll shows 60% of Catholics in the United States support women's ordination as priests and the Pew Forum in Religion and Public Life shows that 39% of people who leave Catholicism do so over the way the Church treats women.
The Vatican is putting pressure on Maryknoll to laicize Fr. Roy to intimidate other priests ,who support women priests, from going public. At the end of the day, this is all about power and control. And this tactic is backfiring! More and more people are supporting our movement.
Yesterday I received a letter from Kelly, a woman who has ten children. She is leaving the institutional church because of the sexual abuse scandal and the hierarchy's treatment of women. When she heard about women priests, she contacted me and asked if there are any women priests in her area. Fortunately, there is a woman priest community not far away from her.
For Catholics who are heart sick with the institutional Church's treatment of women as second class citizens, women priests offer hope. We share women's experiences and claim women's power as spiritual equals. This is helping to heal centuries of misogny. Women priests are visible reminders that women are equal images of God, and therefore worthy to preside at the altar. This is the Vatican's deepest fear, -women as equal images of God- but with God's grace, our presence in communities of faith are helping to transform our beloved church into a more open, transparent, inclusive, community of Christ's love with us.

Posted by Bridget Mary Meehan at 10:46 AM