Pope Francis: On Clericalism and the Holy Faithful People of God//National Catholic Reporter

"It is good for us to remember that the Church is not an elite of priests, of consecrated people, of bishops -- but that everyone forms the Holy Faithful People of God," states Francis. 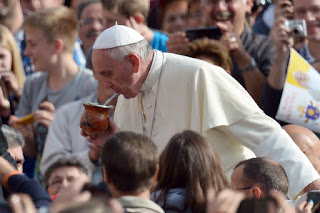 The pontiff then says that he cannot reflect on the role of laypeople in the church "ignoring one of the greatest deformations that Latin America must confront, and to which I ask you to give special attention: clericalism."
"This attitude not only cancels out the personality of Christians, but tends to diminish and undervalue the baptismal grace that the Holy Spirit has placed in the heart of our people," states Francis.
"Clericalism brings about a homogenization of the layperson, treating as 'mandatory' limits to his or her diverse initiatives and efforts, and I would dare to say, the audacity necessary to bring the Good News of the Gospel to all places of social and overall political activity," he continues.
"Clericalism, far from giving impulse to diverse contributions and proposals, turns off, little by little, the prophetic fire from which the entire Church is called to give testimony in the heart of its peoples," says Francis. "Clericalism forgets that the visibility and the sacramentality of the Church belongs to all the people of God and not only an elect or illuminated few."

Francis: Spirit works in laypeople, 'is not property of the hierarchy'