Feast of Our Lady of Guadalupe: " I who am your mother, I who am always close to you" 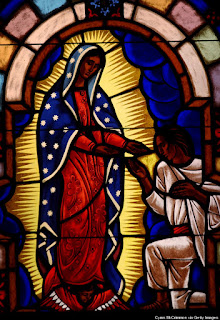 When did she first appear?
"According to tradition, the Virgin Mary appeared to an
indigenous man named Juan Diego on Dec. 9, 1531.
The Virgin asked that a shrine in her name be
built on the spot where she appeared,
Tepeyac Hill, which is now in a suburb of Mexico City.
Juan Diego told the bishop about the apparition and request,
but he didn’t believe him and demanded a sign before he
would approve construction of the church.
On Dec. 12, the Virgin reappeared to Juan Diego and
ordered
him to collect roses in his tilmátli, a kind of cloak.
Juan took the roses to the bishop and when he opened
his cloak, dozens of roses fell to the floor and revealed
the image of the Virgen of Guadalupe imprinted
on the inside. The tilmátli with the image is on
display in the Basilica de Guadalupe."

This is the Our Lady of Guadalupe packet developed by
Future Church, the same Catholic not-for-profit that
promotes
the annual July feast of Mary of Magdala.
They provide interesting background information on this
feast,
a 485-year old tradition established
among indigenous Mexican people in early 16th century.
Their background information is based on a 1994
book by
Jeannette Rodriguez. Several points stood out for us:

1.      The Basilica of Our Lady of Guadalupe in Mexico City
is the most frequently visited Catholic pilgrimage site
in the world.
2.      For years the indigenous people had been
conquered in
every way possible by Spanish invaders:
Their population was decimated by war and
disease, their
religious shrines were demolished, &;
they were subjected to Spanish rule &
conversion to Catholicism.
3.      The Guadalupe tradition represented a way
for the
indigenous people to recover important
aspects of their
religion
and blend it with the Spanish culture & Catholic
religion.
4.      Mary appeared to Juan Diego & identified
herself
as the Mother of the “God for whom one lives,” a
principal name for
their divinity. And she asks Juan why he didn’t
call on her
when his uncle was at the point of death, saying,
“I who am
your mother,
I who am always close to you.”
This Guadalupe figure represented for Juan and his people
the mother of their God, and she recaptured for Juan
and his people the intimacy and constant protection
provided by their male/female God.

5.      This saying, “I who am your mother,
I who am always with you” is the phrase inscribed
in the arch above the basilica’s
front door.
Posted by Bridget Mary Meehan at 8:31 PM