The first thing is that the archbishop of Madrid, as well as that of Santiago de Compostela, and I fear that others, as I move through the territories, has wanted make people fearful and terrorized. First of all the person who has been most seriously threatened "with the harshest punishment" was the pastor who invited me and who was shocked that the archbishop was involved in his pastoral, since up to now he had let him summon all kinds of people even to talk about reproductive freedom… 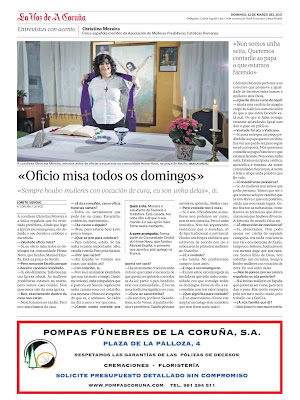 As we can see the worst thing today in the Roman Catholic Church is not to be LGBTIQ or pro-abortion or divorced but to be a woman and a priest. It was quite clear to me that I am public enemy number one.

As happened the previous time, a great sadness struck me to the bone because of what it means to receive these harsh words from my church, without being heard, without them knowing who I am or what I do, and simply sent to the media. I think they are kinder to their dog.

The second is to note, as the members of my community said, that at all times they are showing themselves as extremely harsh – they also receive harsh criticism – it is the deprivation even of freedom of speech. I was not going to confess or marry anyone or to celebrate the Eucharist, but to talk ... to meet people.
What I got out of all this:

- Publicity: the testimonies of solidarity are multiplying and many more people know me.

- A group of people from Madrid organized an alternative meeting the same day but in another place, members of the parish came but also different people who would never have set foot inside a church and who were all very receptive.

- I was promised that I would be invited to events in the future because some people were saying "This is not going to stay this way!" So thank you, Archbishop, every blow makes me stronger.

- From the spiritual perspective, I was telling you in my very awkward English that on the morning of that day when I woke up without knowing what I was going to do whether the meeting would be canceled, I took advantage also of the plane ticket and went to Madrid, and the first thing my heart told God was: Where will we be going today? And it was a turn in me to discover the Presence, the Divine Force accompanying me in the mission. To savor how we would become a team... that grace deserves everything I have lived up to now. I do not go alone, none of us go alone. It was not the same thing as knowing it in theory; it was a sort of theophany in the middle of the storm. I immediately knew that everything would go well.

- Conclusion for ecclesiology: this was a good lesson. I may have, and others also, projects for the church of the temples, but when the Holy One sends me out... I not only obey but I also ask for forgiveness because I was following a path that was not the right one.
So now I know that I am sent out there... and I am immensely happy, waiting for the next trip to a mission that is already being prepared because several people have already requested my phone for other regions.

I'll wind up calling myself Paula, hahaha!
I love you all, I feel your strength with me and... what more can you ask for. We are big because the one who sends us is Immense ... and we will grow even more
Christina Moreira Vázquez, ARCWP Priest/Asociación de Presbíteras Católicas/Association des femmes prêtres catholiques , www.arcwp.org

Posted by Bridget Mary Meehan at 8:11 AM