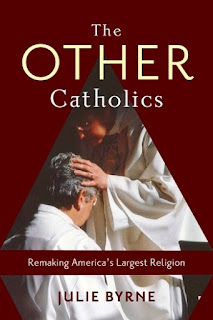 Byrne argues that the independent Catholics are a gift that helps Catholicism to evolve and meet pastoral challenges such as gender justice: “But since no one thought Catholicism had ‘denominations,’ no one noticed....

In a dramatic illustration of how “the other Catholics” are remaking the largest religion, Byrne recounts the enthusiastic gathering of a Richmond parish of the Church of Antioch on October 16, 2005, for the consecration of three women bishops: Patsy Grubbs, Diana Phipps and Kera Hamilton. She writes: “Archbishop Richard Gundrey laid hands on heads, when he said, ‘Be filled with the Holy Spirit,’ and breathed upon anointed scalps, when each was given a ring and crozier, then fitted with the miter and sweetly fussed with to make sure the hair still looked good, somehow there was no avoiding the sense that this ancient ritual resounded afresh when performed on female bodies. By the end of the presentation of the episcopal insignia, the new bishops were in tears, and so was most of the church.”

The Other Catholics pinpoints social justice as a common thread that connects both independent Catholics and progressive Roman Catholics, and credits the founding bishop of the Church of Antioch as a visionary who impacted the future of both groups on hot button issues. “If social justice aims for the equal thriving of all human beings in society, sacramental justice seeks everyone’s full access to the sacraments. [. . .] The [bishop] took radical Catholic stances on divorce, remarriage, and women’s ordination, pioneering what I am calling sacramental justice.” Even though substantial change in Roman Catholic teaching evolves slowly, it does come.

In 2016, the Vatican newspaper, L’Osservatore Romano, followed the Church of Antioch’s lead by publishing guidelines on the Amoris Laetitia, Pope Francis’s document on family, which stated that remarried Catholics may receive Communion under certain conditions.

One takeaway from this book is that Roman Catholicism is not the only way to live a vibrant Catholicism today. The “other Catholics” in independent churches are courageous pioneers of Gospel inclusiveness from whom we have much to learn. Our sisters and brothers in these ecclesial communities have led the way to a more inclusive community of faith by sharing the sacraments with all, and by listening to the Spirit’s call in other traditions and experimenting with new blends of Catholicism.

After reading this book, I look forward to a sequel with more stories about independent Catholics and the new inclusive communities emerging within the Roman Catholic Church. Like Peter Manseau wrote in the New York Times, I too believe: “Though [Pope Francis] surely did not intend it this way, ‘Who am I to judge?’ would be a fitting motto for a papacy that saw a thousand Catholicisms bloom.”

I pray that a thousand Catholicisms will continue to blossom in our church and world!


SISTER BRIDGET MARY MEEHAN, DMIN is a bishop within the Association of Roman Catholic Women Priests, is one of the founding members of the People's Catholic Seminary and author of Living Gospel Equality Now.
Posted by Bridget Mary Meehan at 12:14 AM