"Pope Francis Requests that Roman Catholic Priests be given Right to Get Married" by Matilda Long, Yahoo News UK 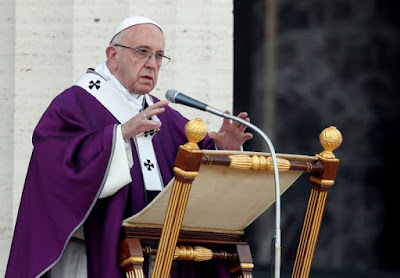 My Response: It is about time. I am happy we are returning to our ancient tradition of  a married clergy. Optional celibacy will open the doors to hopefully a more balanced priesthood where there is choice. Now we need the institutional church to accept women priests and finally say and mean "equality means equality!" Bridget Mary Meehan ARCWP, sofiabmm@aol.com, www.arcwp.org


"The request applies to priests in Brazil, and is on the agenda for an upcoming synod (church council) in the Amazon region.
The controversial move would address the critical shortage of men joining the priesthood – but is likely to drive divisions through the church by enraging conservative factions.
A small number of married Roman Catholic priests already exist, including previously married Anglican vicars who have joined the church.
A request to lift the ban on marriage was made by Brazilian bishop Cardinal Claudio Hummes, who reportedly asked the Pope to consider ‘viri probati’, meaning married of great faith, as priests."
Posted by Bridget Mary Meehan at 12:18 PM