"Should women rejoice over 'Gaudete et Exsultate'?" Apr 13, 2018 by Jamie Manson, National Catholic Reporter, My Response: Journey to holiness and wholeness includes women priests in a community of equals 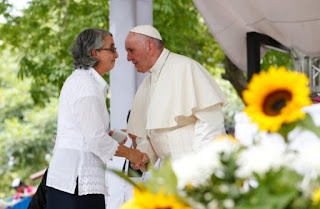 My Response: Pope Francis needs women like Jamie Manson in his life who will raise his consciousness that the journey to holiness includes affirming everyone's God-given gifts and call- including women priests. Many women priests would be open to sharing their call and experiences. So far, no invitations have been forthcoming!
Francis keeps going down the same rabbit holes with bad, misogynist "jokes" like comparing gossiping nuns to terrorists!
"You know what a gossiping nun is? A terrorist!" Francis told the women, according to a Reuters report.