'It's embarrassing' - Mary McAleese hits out at the Pope over his 'disappointing' stance on women priests and 'evil' attitude to homosexuality" by Sarah MacDonald, Irish Independent


My Response: I am grateful to Mary McAleese for her courageous challenge to
Pope Francis to embrace a more open and affirming stance toward
women priests and LGBTQI.
It is time for Francis to have conversations with women priests and
members of our inclusive communities as a first step forward.
Bridget Mary Meehan ARCWP, #womenpriestsnow, https:arcwp.org

Former President Mary McAleese has appealed to Pope Francis to address his "disappointing" stance on women priests and the Church's "evil" attitude to homosexuality.
In an interview to mark 100 years since the foundation of the Missionary Society of St Columban, Dr McAleese told an audience of Columban priests, sisters and co-workers that the Argentinian pontiff, though loved by many, was "no different to any other pope on women". 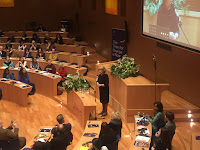 She said the Church's arguments against women priests were "ultimately untenable" and that the "curial magisterial Church" was "so far behind the curve on women, it is embarrassing".
She recalled writing to Pope John Paul II in 1994 about his Apostolic Letter, Ordinatio Sacerdotalis, which ruled out women ever becoming priests, and in her letter she told him she could not, and would not, teach her children this teaching on women.
In Dalgan Park, home of the Columbans in Ireland, she described the Church's teaching on homosexuality as "evil", saying it gave rise to homophobia.
"Homophobia," she also said, was "evil" and "ruins peoples' lives" and "has ruined families' lives" because it "causes people to commit suicide" and "has caused people to live in dark shadows". 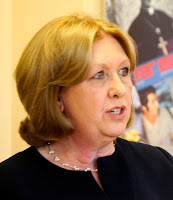