"Civility" by John A. Dick, Ph.D., S.T.D., A Conversation with a Conservative by Bridget Mary Meehan ARCWP 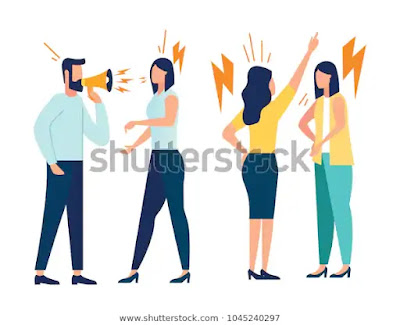 On a two hour flight from Washington DC to Sarasota on July 18th, I sat next to Mike. As we conversed, I realized that Mike is a conservative and anyone who knows me will affirm that I am a flaming liberal.  Even though we were poles apart in our views on  politics, immigration, and poverty, we really tried to listen to each other and occasionally even found a wee bit of common ground on some hot button issues.   I shared a little about my outreach to homeless folks and when he asked what I did when we landed, I handed him my card. After we deplaned, Mike gave me a donation for my ministry.
This encounter is another reminder that  the Spirit moves in people- I totally and passionately disagree with- and that they are my neighbors. Apparently, this is a lesson I need to learn again and again!
In this divisive atmosphere in our country, let us try to build - as John A. Dick recommends- coalitions of transformation: communities of faith, hope, and support.  Amen!
Bridget Mary Meehan ARCWP, https://arcwp.org

John A. Dick- "Civility"
Recent events emanating from Washington DC compel me to reflect and write about how we treat one another in political discourse. I am not writing about politics but about virtue and public morality.
What were once episodes of ugly verbal abuse are now evolving into a plague of racism, misogyny, and xenophobia. A fierce polarization is creating deep divisions. Civility is being replaced by adolescent-type bullying and public denigration of anyone who challenges and questions the administration. There is nothing Christian about such behavior and it creates a threateningly inhumane cultural environment.
Civility means much more than politeness, although politeness is indeed an important first step. Civility is about interpersonal respect and seeking common ground as a starting point for dialogue about differences. It is about moving beyond preconceptions and listening to the other and encouraging others to do the same.
Civility is hard work because it means staying present to people with whom one can have deep-rooted and fierce disagreements. It is political in the sense that it is a necessary prerequisite for civic action. Civility means collaborating for the common good. It is about negotiating interpersonal power in such a way that everyone's voice is heard, and nobody's voice is ignored. Civility means that despite different perspectives we still have a shared vision and collaborate to make it a reality.
When civility is replaced by mockery, dishonest accusations, and abusive slogans, people become monsters. History amply demonstrates that monsters create more monsters. History also reminds us that such a scenario never has a happy ending.
The message this week is small. The task awaiting us is enormous. Civility begins with you and me, with family and friends, with neighbors and colleagues, etc. We gradually construct what I like to call coalitions of transformation: communities of faith, hope, and support.
At the end of this week, we all should reflect on the message in Luke 10:25-37: On one occasion an expert in the law, who wanted to justify himself, stood up to test Jesus and so he asked Jesus "And who is my neighbor?"
Take care.
Jack

John A. Dick, Ph.D., S.T.D. (ARCC Vice President and Treasurer)  is a historical theologian - retired from the Catholic University of Leuven and the University of Ghent