"I’m a Catholic woman who was allowed to preach at Mass—until it was banned" by Jean Molesky-Poz, America 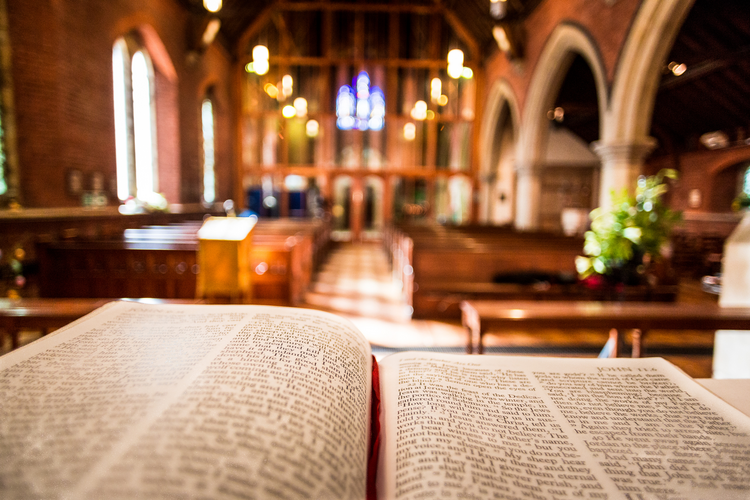 iStock
“Mary,” Jesus said to her. When she heard him call her name, she responded, “Rabbouni!” Teacher.
“Go to my brothers,” he said, delivering a direct commission to announce the “good news.”
“I have seen the Lord,” she told the disciples.
In our parish in Northern California, lay women began to preach the good news during the Sunday liturgy in 1996. The practice emerged from within the faith community. Several women had approached our pastor and spoke of the devastating lack of women’s spiritual wisdom and leadership in the church for 2,000 years. We asked: Couldn’t women, who feel called and are prepared, give a homily—a teaching that expands on the message of the Scripture readings and invites listeners to a change of mind and heart?
“I wondered if anyone would ever ask,” he said.
Like Mary of Magdala, women who gave homilies had experienced a deep call and felt commissioned to share the good news. We had discerned both with our spiritual directors and pastor. All of us who were lay preachers had studied theology at the university level—some had earned a masters of divinity degree. Some were or had been members of a religious order or had special knowledge of a particular pastoral issue within our parish community. We had demonstrated an expertise or experience of the lay faithful, as required by Canon Law (No. 766).
Members of the congregation told us they were eager to hear our words. One parishioner said to me: “Hearing a Catholic woman reflect on the Word during Sunday’s liturgy is a breakthrough experience for women and for men. It strengthens us as the body of Christ.” We felt that the church, local and universal, recognized in us the gifts bestowed on us by the Spirit—the fresh perspectives we contributed to the community—just as the early Christian church had recognized women’s leadership.
[Don’t miss more stories like this one. Sign up for our newsletter.]
Each time one of us preached, the pastor who had first invited us wrote a two-page, single-spaced letter to whomever had spoken, warmly commenting on the delivered homily. Once a year, the parish priests invited us lay preachers to dinner at the rectory, where together we discussed what went well and what we might do better. We women felt enmeshed in the prophetic leadership of the parish.
Parishioners might say, as the townspeople of Samaria did 2,000 years ago, “We believed in Him on the strength of the woman’s testimony” (Jn 4:3).
In 2001, the United States Conference of Catholic Bishops, in accordance with No. 766 of the 1983 Code of Canon Law, declared that “preaching by the lay faithful may not take place within the Celebration of the Eucharist at the moment reserved for the homily.” Nevertheless, the conference recognized the right of each bishop to permit the practice of lay preaching in his own diocese, though not during the time traditionally set aside for the homily.
Like Mary of Magdala, women who gave homilies had experienced a deep call and felt commissioned to share the good news.
Tweet this


Our bishop and our parish priests, years earlier, had recognized the gift of lay preaching. Nobody expected that the clock might be turned back. But in 2009, restrictions began to be put in place. A new bishop in our diocese mandated that the priest celebrant must read the Gospel at Mass and he alone give a short homily. Lay people could then offer a “reflection,” sharing our thoughts. But we could not give a homily.
The congregation was stunned. Yet this was an order, and we lay preachers had no choice but to obey. In 2013, another new bishop arrived, and we lay people were told we could no longer give even a “reflection.” The crushing ban has spread to many U.S. dioceses.
A friend of mine in Wisconsin who had preached monthly at her parish for over 20 years wrote to me in “great sadness and disappointment.” She shared with me the letter she was sending to Bishop Rembert Weakland, a former archbishop of Milwaukee (1977-2002). She began by thanking the bishop for “opening the door” years ago by allowing lay ministers to be trained and formed to preach through the diocese’s preaching institute. She knew she had brought the Gospel to life in the hearts and minds of many who heard her. We who preached had a particular gift to offer to the church, which our faith community affirmed. An institutional decision rejected the giving of gifts.
Tweet this


The clerical decision to ban lay people from preaching affects women in a particular way. Women are not allowed to be deacons, deemed unworthy of holy orders. Only in the last century have we been admitted to study theology at Catholic universities. In the movements begun by the Second Vatican Council calling for a greater place for the laity at every level of church life, women have seen new opportunities to share our gifts in the church, and lay preaching was one important way to do that. Of the 13 lay preachers in our parish, 12 were women.
In the past months, I have asked others in our parish whether they believed the ban on lay women delivering a homily affected their feelings about their place in the Catholic Church. Most said that they carry within themselves a sense of loss, of dislocation. Some women said they felt anger, others disappointment and discouragement.
I found myself in grief, as though a loved one had died. As mourners are often counseled to do, I realized I had to name and claim the loss to heal and go forward. We who preached had a particular gift to offer to the church, which our faith community recognized and affirmed. An institutional decision rejected the giving of gifts.
Catholic women are seeking community, are worshipping and sharing their faith in new ways.
Tweet this


Catholic women are seeking community, are worshipping and sharing their faith in new ways. While remaining Catholic, one woman I know now also participates in an Episcopal parish where she says she finds more inclusive language in worship. Another, who is lesbian, joined a Methodist church where she said she felt more welcomed in her sexual orientation. Some visit Protestant parishes where women preach. I have met Catholic women who have left the church to serve as ministers in Methodist and Unitarian congregations or as Episcopalian and Presbyterian priests.
Some Catholic women cannot find a home.
What kind of church are American women looking forward to in this 21st century? My friend Kristi, a lay associate of the Religious of the Sacred Heart, answers for many of us: “a beloved community.”
Kristi supports low-wage workers and immigrants who are fighting for justice and dignity in the workplace by helping them to organize for unions, health care and a living wage. “I am doing what I am doing in the world because of my Catholic faith,” she said
In each of the four Gospels, Jesus commissions Mary of Magdala to go to the brothers and herald the good news.
Tweet this


Yet Kristi feels she no longer has a place in the church. “I had just been invited into lay preaching when the bishop stopped it in our parish,” she told me. “Days later, I dreamt I was being gagged, a black cloth covering my mouth, silenced, powerless.”
“At this point,” she said, “this church is not a healthy place for my soul.”
At a recent lecture at Santa Clara University, theologian Elizabeth Johnson, C.S.J., pointed out that for centuries the church excluded women’s voices and spiritual wisdom “because of our so-called feminine nature.” But she advocated for “courage and hope.”
RELATED STORIES

At the Ambo: The unique perspective of women preachers
Jean Molesky-Poz

How can the church honor women? Elevate Mary Magdalene’s feast to a solemnity
Alvan I. Amadi
Today women “do not have the authority of the church office, but they have the authority of their baptism,” Sister Johnson said. We were given new birth by water and the Holy Spirit. Girls and boys. We have to be deeply prayerful despite the conflict, she said. “You cannot do this alone.” Sister Johnson suggested we form support groups.
In our parish, we have formed a bi-monthly lecture, reflection and discussion series, just for women. Feminist biblical scholars examine overlooked stories of women in the Bible and provide skills to reconstruct biblical history in which women were central and active agents. Muslim women dialogue with us on their faith, and undocumented mothers share their stories, as do women ministering to girls who have been sex trafficked. We inform one another of needed social actions that reflect Catholic social teaching. We make retreats together; we visit monasteries where we search for wisdom for our everyday lives. Wanting to seek and share contemplative intimacy with God, we are forming prayer and spirituality study groups in our homes and apartments. Some women have joined religious communities as lay associates; others are forming new base Christian communities.
Women’s experiences and ways of relating to the mystery of God can be a vital source of spiritual wisdom, can help build up a vibrant and inclusive community and offer collaborative forms of leadership. After all, in each of the four Gospels, Jesus commissions Mary of Magdala—or Mary with other women—to go to the brothers and herald the good news.

Jean Molesky-Poz
Jean Molesky-Poz is a lecturer in the graduate program in pastoral ministry at Santa Clara University and the author of Contemporary Maya Spirituality and numerous articles, including “At the Ambo: The Unique Experience of Women Preachers.” She is completing a novel, The Interpreters.
Posted by Bridget Mary Meehan at 8:35 PM