Today is the Feast Day of St. Mary of Magdala, the Great Apostle, Celebrate Liturgy and Legacy 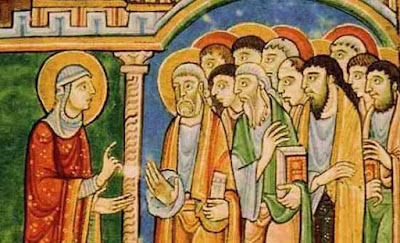 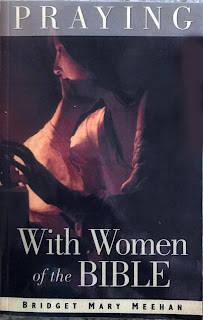 Praying with Women of the Bible by Bridget Mary Meehan
https://www.amazon.com/Praying-Women-Bible%20New%20Edition-Bridget-Meehan/dp/097937670X

In Luke 8:1-3 we learn that with Joanna, the wife of Herod’s steward, Chuza, and Suzanna, Mary of Magdala “and many other women” accompanied Jesus and the male disciples around Galilee and “provided for them out of their resources.”  This short text tells us far more than might at first be apparent to our 21st century ears that don’t understand the social customs surrounding women in first century Palestinian Judaism.
To begin with, women were rarely named at all in ancient texts.  If they are named it is because they had some social prominence and even then, in most situations, they are named in relationship to the men in their lives, such as their husbands, fathers or brothers.  Women were considered to be part of the patriarchal household and it was rare for them to have an identity apart from a male relative.  So we see Joanna, the wife of Herod’s steward, Chuza.  Herod is the king. Joanna is part of a wealthy household belonging to Chuza.
But when Mary of Magdala is identified, she is named for the town she came from, not according to a male relative.  Bibilical scholars believe this means that Mary of Magdala is a wealthy woman of independent means. And with Joanna and Suzanna (about whom, alas, we know very little) these women were prominent financial supporters of Jesus’ Galilean mission.
Thus began a long history of women’s patronage that helped Christianity spread relatively rapidly throughout the Mediterranean world.  For example, we know that Paul had many wealthy female patrons such as Lydia and Phoebe who financially supported his ministry and introduced him to a broad swath of social relationships in the Ge

Jesus’ women disciples often surpassed their brother disciples in fidelity to the person of Jesus, particularly in events surrounding Jesus’ passion and death.  While the Gospels tell us the male disciples fled to Galilee, the women stayed by Jesus’ side through crucifixion, death burial and Resurrection.  This is why all four Gospels show women as the first witnesses.  They knew where Jesus had been buried. And the women were then commissioned to “Go and tell your brothers” the good news of Jesus’ victory over death.
That the message of the Resurrection was first entrusted to women is regarded by scripture scholars as strong proof for the historicity of the Resurrection accounts. Had accounts of Jesus' Resurrection been fabricated, women would never have been chosen as witnesses, since Jewish law did not acknowledge the testimony of women.
Early extra-canonical Christian writings show entire faith communities growing up around Mary of Magdala’s ministry, where she is portrayed as understanding Jesus' message better than did Peter and the male disciples. Scholars tell us that these writings are not about the historical persons of Mary and Peter, but instead reflect tensions over women's leadership roles in the early Church. Prominent leaders such as Mary and Peter were evoked to justify opposing points of view.
What is not disputed is the portrayal of Mary of Magdala as an important woman leader and witness in the earliest Christian Churches.

Posted by Bridget Mary Meehan at 8:39 AM