http://www.cultura.va/content/cultura/en/plenarie/2015-women/outline.html
Another ill-advised move by the Vatican!This naked woman image put out by the  Pontifical Council for Culture reflects the Vatican’s patriarchal, dysfunctional view that holds women in spiritual bondage. This image denigrates women's bodies and souls and reflects a deep misogyny in need of healing and transformation. If we had women priests at the Vatican, do you think an image like this would see the light of day?
Bridget Mary Meehan, ARCWP, sofiabmm@aol.com
www.arcwp.org,www.marymotherofjesus.org

The Vatican is clueless on women's issues. This article below with the defensive explanation indicates that the headless Venus tightly bound in ropes is totally inappropriate and  that  the explanation by  Micol Forti , director of the Contemporary Art collection of the Vatican Museum,  is a  huge stretch!! Once again, men are making decisions about women's issues, and they have come up an image that insults all women who believe that they are equal spiritual images of God. When will they ever learn?  Only women can provide the help that is needed!


"From the article: “Adding fuel to the fire, the website of the general assembly is illustrated with an image of “Venus Restored” by artist Man Ray, a plaster cast of a headless Venus tightly bound in ropes. The 1936 sculpture is intended to depict woman as a subjugated sex object, but also as a creature who rises above men’s depictions. Critics have questioned the wisdom of using such an image for a discussion of women, suggesting it may send the wrong signal about the Church’s support for female emancipation. Micol Forti, director of the Contemporary Art collection of the , said that the sculpture was chosen among other possibilities because it represents the past as an “anchor to generate new ideas.” Forti said that the picture is imperfect to reflect the complete and articulated sense of the assembly, adding, “It’s not a headless or armless body, but a reflection on classic tradition and the possibility of rediscovering a role in contemporary life.”


The Pontifical Council for Culture has an agenda on women: the same tired old cage

"In fact, they don’t really want women’s input in this initiative on “Women’s Culture.” As Soline Humbert informs me, “The Pontifical Council for Culture has 32 permanent members, all male, appointed for 5 years. Almost all are cardinals, bishops and priests, and a couple of lay men (“men of culture”…No “women of culture”…) There are also Consultors who are appointed by the pope… There are 27 male consultors, and 7 women, ( if I remember correctly), appointed last Summer by Pope Francis.”
In other words: that’s zero females among the 32 permanent members of the Pontifical Council, while in the outer circle of Consultors the ratio of men to women is 4:1, for a total of 59 men and 7 women. This is who is going to issue a definitive statement on “Women’s Culture” — and they expect that to pass for change, in their  initiative to engage Catholic women.
This is a familiar pattern of high priestcraft: barring women entirely from the core of power, and admitting a few carefully screened females to an outer circle, where they are greatly outnumbered (and outranked) by men. Soline adds that “there has been a mention of a group of women working on the outline discussion document now released, but I have not seen the names of the members of that group (anonymous women?) nor how they were selected. In addition, while they mentioned there would be an ‘Open Day’ it seems it’s again by invitation only for a select few….” 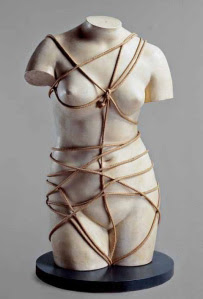 Venus in bondage: the hierarchy’s vision of Women’s Culture
The image selected for this initiative is highly symbolic: a naked, headless, armless, legless woman in bondage. It is Man Ray’s 1936 photo “Venus Restored.” This is their idea of Women’s Culture?!? Soline Humbert sums it up well on the We Are Church Ireland blog:
“Man Ray had a strong interest in Sade and sadism and there is a recurrent sadistic streak in his artwork, as well as in his relationships with women, characterised by domination and aggression. Man Ray photographed women wearing implements of bondage and enacting scenes of torture. He also helped others, like William B Seabrook realise in real life his fantasies of women bondage.
“What is behind this choice of female bondage image by the (all male)Pontifical Council for culture? Is it the choice of the group of women (Who are they?) behind this document? What message does it seek to convey?”
We may well ask.
The same goes for Pope Francis’ recent scoldings of Pilipina women for their high birth rates, after decades of churchmen steadily advocating the rhythm method! As if abstinence is a real option for most married women in this world. He does not have the least clue about the reality that they live.  When it comes to women, nothing has changed..."