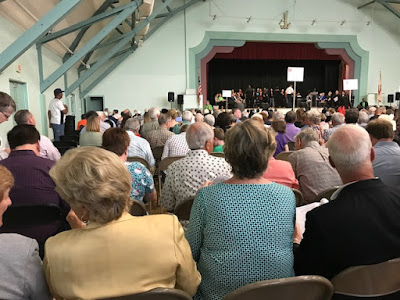 In a packed Municipal Auditorium, members representing 19 Congregations and faith traditions assembled to hold elected officials accountable on their actions for the well-being of Sarasota- specifically on the issues of out of school suspension and affordable housing.  Sarasota United for Responsibility and Equity was founded in 1998 when clergy from diverse congregations recognized the need to unite with one another to form a powerful enough voice to press for necessary change in the community.

Marie Scott from our Mary Mother of Jesus Inclusive Catholic Community has attended SURE meetings and given us reports on a regular basis. Tonight, I was blessed to join such a massive Assembly speaking truth to power and demanding justice from our local and state leaders. This is an awesome example of prophetic action that unites all religions and faith traditions.

Three years ago, SURE won a commitment from Commissioner Paul Caragiulo to champion an effort to get a Comprehensive Treatment Court funded to help those living on the streets with mental illness into housing and services rather than incarceration. This secured 2.4 million for the court to run over the course of the next three years. It started March 1, 2017 and already had helped 80 people off the streets into housing.

This assembly takes its inspiration from the fifth chapter of  the Book of Nehemiah in the Hebrew Scripture which describes how the prophet organized a "Great Assembly" to hold the money lenders who oppressed the people  accountable. During this assembly, the money lenders agreed to restore all they had taken from the people and they followed-through on their promises.

At the SURE Nehemiah Action Assembly different leaders presented updates on Sarasota Suspension Program which shows no improvement, but in fact on the increase. Dr. Todd Bowden, Sarasota District Superintendent and School Board Members was asked to take specific action steps such as visit Duval County Schools with other District Administrators and SURE representatives to see their Restorative Strategies Program. He agreed to take this step and reports data to SURE, the School Board and others. He did not agree to write a full implementation plan.

Currently, all law enforcement agencies in Sarasota County and municipalities have implemented Civil Citation for juvenile misdemeanors since 2015. 69% of eligible youth are receiving Civil Citations instead of an arrest record that limits their possibilities far into the future.

Florida continues to arrest too many youth for non-serious offenses. In recent years Florida arrested more of our youth than California or Texas. Shockingly over the last five years, Florida arrested 20, 845 children between ages of 5 and 12 years old.

This year SURE negotiated a compromise bill with Rep. Sprowls and Rep. Ahern, from Pinellas County (HB 1197).  The companion bill (SB 1392 ) was filed by Sen. Brandes. Their bill passed the house and Senate nearly unanimously and will now go to the Governor to be signed.
The bill will expand access to juvenile civil citations.

While a zoning change for units of  900 sq ft or less was made  requiring only 1 parking space represents an improvement, the other recommendations were not supported.

Neither Commissioner, Alan Maio or Paul Caragiulo supported SURE's Opportunity Fund Recommendation. (1) targets households making 60% AMI or less ($37,000), 2) dedicates 10 million of dedicated annual revenue, 3) have an oversight board of 5 community members, 4) projects maintaining affordability for at least 30 years.
This was a very disappointing response.  Both men agreed --Sarasota is facing a crisis and it deserves a committed response from the County Commission, and that they would look into ways to create a "Housing Opportunity Fund"with a dedicated revenue source aimed at households making less than $37.000. But, both commissioners did not commit to develop such a plan for a Housing Opportunity Plan. How sad! What will it take to make this happen. I am sure SURE's dedicated faith communities and leaders will keep up the pressure and build public support for such an endeavor!

Carrie Seidman in her article in the Sarasota Herald Tribune on March 25, gave high marks to SURE for following the biblical prophet the Book of Nehemiah "who transformed anger into action to rebuild Jerusalem" for holding "local officials' feet to the fire on targeted issues critical to our community's justice, equity, and inclusivity."
She cited SURE's long list of accomplishments since its founding in 1998: "championed the effort to get a jail diversion program for homeless individuals with mental illnesses, helped extend bus service to Longboat Key to accommodate (those) dependent on public transportation for work; worked to implement a substance abuse and rehab program in the county jail; and secured a commitment to civil citation rather than arrest for juveniles with low -level offenses."

The meeting ended with Rev. Paul Werner praying that we would continue to speak truth to power and usher in the beloved community where the weak are protected.

SURE is one of the best bets we have going to hold elected leaders accountable.