"Holy Celebrity: Why I want to see the Pope" by Catherine O'Mahony, Irish Independent 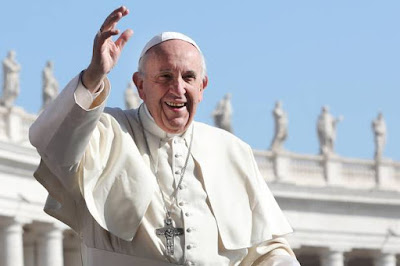 Catherine O'Mahony
June 17 2018 2:30 AM
Let's just get this out there: I want to see Pope Francis. When the tickets for attending the Papal Mass in the Phoenix Park are released online on June 25, I will be poised at my laptop to pounce. And if I'm unsuccessful, I'll be sad. There it is.
In many ways, to be fair, this makes absolutely no sense. I have not held a set of Rosary beads since I was seven. I ignore the calls to pay dues. I rarely attend Mass so if I do manage to snag a ticket for the Papal Mass, this will one of a tiny handful of masses I will attend this year.
I am - in essence - an á la carte Catholic, or a lapsed Catholic, or possibly a cultural Catholic. It all amounts to the same thing. Catholicism feels like a part of who I am. At certain moments it feels like a core part of who I am. But it certainly does not define me.
And yet, when life strikes a blow, the Church, with its shady interiors and unmistakable smell of varnish and incense - often beckons. When my parents died, I helped organise Catholic funerals for both of them, and took considerable comfort in the familiar ritual that eased their passing. You will also find me in a pew on Christmas Eve, and on Easter Sunday - the big days, when virtually everyone finds religion. I show up at Communions and Confirmations, and I am not only there for the party; I am moved by the beauty of those ceremonies.
Still, though, why Pope Francis?
Partly out of sheer curiosity. Pope Francis is a Big Cheese, after all, whatever you make of the Catholic Church. He is a celebrity. And, as popes go, he has more to recommend him than the average. He is gentle, unassuming. I respect the fact that he clearly has very little time for the Vatican's overblown pomp and ceremony. I like his devotion to the poor, to prisoners, to the sick. I am very disappointed with his views' on women's ordination but not enough - it turns out - to want to shun him entirely.
Then there's nostalgia. I was in primary school when Pope John Paul II showed up in Ireland in 1979 and remember feeling like the only person in the country whose family did not travel to see the Pontiff. (My best friend went and came back with thrilling tales that had very little to do with the Pope, and much to do with the terrifying risks her father had taken on the way there to beat the endless traffic, but that's another story).
Nonetheless, I was commissioned by my teacher to assemble a class project on what was - for an Irish child in Catholic school - the very biggest event of the year. I remember the painstaking Sellotaping of pictures from the paper, the careful transcription of his every word. As I laboured at the back of the classroom, I recall feeling that I was doing holy work, like I was part of it all. And yet my only encounter with the Pope was on TV.
This time I hope to change that.
Posted by Bridget Mary Meehan at 11:13 PM